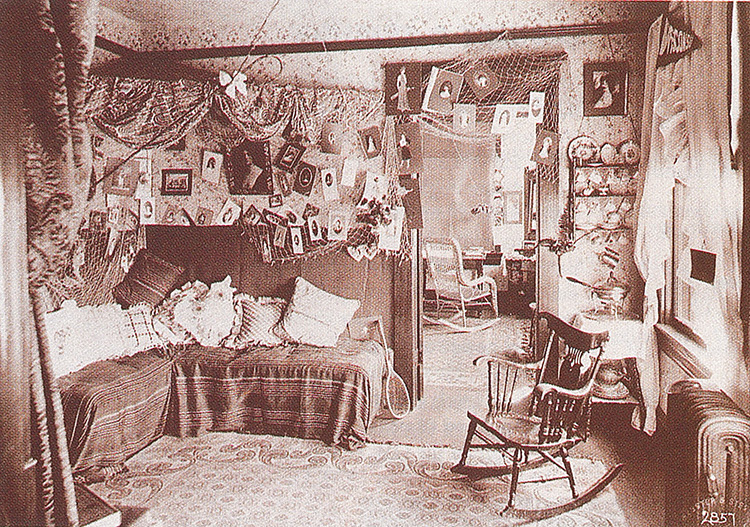 The interior of a room in the women’s dormitory. UW Libraries Pacific Northwest Collection photo.

An industrial sized dose of Tylenol wouldn’t have helped the University of Washington’s growing pains the last time a century turned.

Simply put, the UW’s Y1.9K problem was that the campus was bursting at the seams. In 1899, more than 600 students—oh, a good Jon Bridgman lecture’s worth at Kane Hall—jampacked the five-year-old University District campus.

“I think that the University has forged ahead splendidly,” said Frank P. Graves, the UW president at the turn of the last century. “We shall have not less than 650 students at the end of the year. This very increase, however, creates problems that never had to be met before. We are dreadfully crowded for room.”

The UW desperately needed two more buildings and a lot more in the way of maintenance. “Unless something is done now,” Graves lamented, “the University will have to go back to the day of small things, and stay there for a while.”

The UW’s first residence halls, Lewis Hall on the left and Clark Hall on the right, were still a dream for President Frank Graves in 1899. UW Libraries Pacific Northwest Collection photo.

In 1899, the University was also grappling with another large-scale issue: how and where to house its students. Living quarters had been a key element to the UW since its days as a territorial university in downtown Seattle. Prospective students were brought in from all parts of the region, and they needed a place to stay. But the new campus the University moved to in 1895 had one big problem—it was out in the woods. Students and professors alike lived in the city, and had to commute five miles by streetcar to campus.

Graves checked around with other growing public universities to see how they were handling the situation on their campuses. The ideas of creating dorms was up for debate nationwide, and the consensus of several college presidents came back with a thumbs down on dorms. Graves pushed ahead, all the while hoping local church organizations would provide housing. They didn’t.

So he decided to have two buildings constructed, one for men and one for women. The students would save money (dorm rooms would cost $8 to $10 a month versus the $25 students spent on room, board and carfare from downtown), he argued, save time commuting and create camaraderie otherwise not likely.

He made student housing his top priority as he went to the Legislature for funding. “If these dormitories are not established, the University can hope for little more than to hold its ground for the next years,” he said. “Real growth is impossible.”

The Legislature listened to the pitch, and came through. The UW’s first dorms, Lewis and Clark Halls, were on the drawing board. As far as students were concerned, the UW was home free.