1895 Observatory is a fading star on UW campus 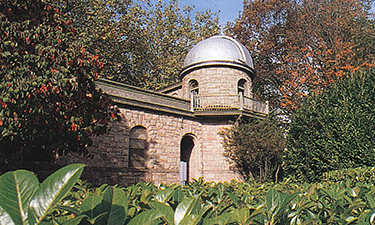 Surrounded by trees and a parking lot, the Observatory today is used only for public showings two nights a week. Photo by Jon Marmor.

In its heyday, the UW campus observatory was a magical place. Featuring an expertly crafted, six-inch refracting telescope made by one of the top lensmakers of the time, it drew stargazers from far and wide to the charming, boxy stone building a stone’s throw from Denny Hall.

Of course, back when the building opened in 1895—the second structure on the then “new” UW campus—it was pretty much out in the middle of nowhere. And that meant superb celestial viewing.

How things have changed. Today, the telescope is an outdated antique, a gorgeous piece of machinery and glass that can’t hold a candle to the 12-inch telescopes most amateur astronomers have in their living rooms. And the future of the cute little building, sitting just east of Memorial Way, is up in the air. 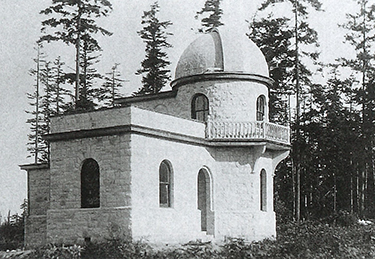 The UW’s 1895 Observatory, freshly built in this photo, is the second-oldest building on campus. Photo courtesy Special Collections, UW Libraries.

The reasons are many. The sycamore trees planted nearby have grown so tall that they obstruct most of the night sky. What’s left for viewing out of the hand-cranked, steel dome is nearly ruined by the lights in adjacent parking lots and development in the University District. The narrow, winding staircase leading up to the viewing area can’t really accommodate large groups, and the equipment itself—described by Astronomy Chair Craig Hogan as “simply exquisite”—is in dire need of repair.

The building is used by the campus’ custodial services department and also holds a 55-seat classroom (now used for ESL classes and TA training); two tiny bathrooms; a domed room housing the antique transit telescope; and a room with ancient, lighted display cabinets that once belonged to the Astronomy Professor Emeritus Theodore S. Jacobsen.

“It’s a wonderful part of campus history,” says Astronomy Professor Paul Hodge, who used to come from his home in Snohomish to view the stars as a little boy.

Although the little observatory has a big place in many people’s hearts, it hasn’t been used by the UW astronomy department for research or viewing for many years. “It’s sort of a quaint thing,” says Astronomy Professor George Wallerstein. “It’s hardly used at all.” Today, the UW uses an observatory on Manastash Ridge in Eastern Washington and the cutting-edge 2.5-meter telescope at the Apache Point Observatory in the Sacramento Mountains of southern New Mexico for research. 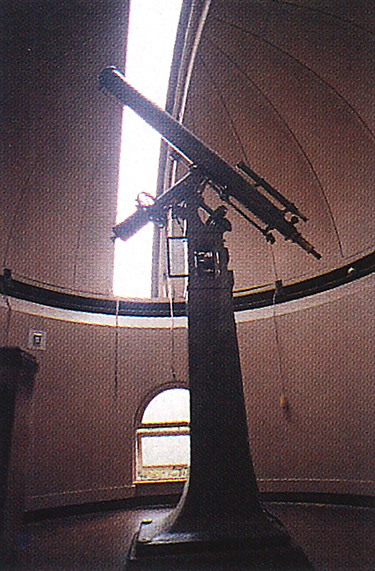 The UW observatory is still used for public showings Monday and Thursday nights, clear skies prevailing. But the observatory’s future could be in doubt. As the trees continue to grow, it means less and less of the sky will be available for viewing. The building and its equipment are showing their age, and haven’t been maintained very well. The hand-operated dome—which years ago rested on Civil War cannonballs used as bearings—is difficult to operate. The structure—which was designed by architect Charles Saunders, who designed Denny Hall and which uses leftover sandstone blocks from the construction of Denny Hall—is not wheelchair accessible, and isn’t really designed for public viewing.

There has been talk of closing the observatory, maybe taking the telescopes out and putting them on display in a museum, or turning the little building into a visitors center or offices for TAs. “I would like to see it adopted by a sympathetic scholar,” Hogan says. “Someone who is interested in the history of science and the campus. It’s a great place-but it has nothing to do with the future of astronomy.”

So the little observatory remains as it has for decades, a relic reminding us of the past, and the need to look to the future.