A 37-year tradition suddenly went up in smoke on May 24, 1949, when the University of Washington’s Chimes Tower burned down. Until that day, the UW campus was filled with the sound of music in the morning, at noon and in the afternoon, with special Sunday concerts of religious music and even the tolling of football scores after home games.

Older alumni still remember the 7:50 a.m. “wake-up concert” that often got students out of bed and on their way to their 8 a.m. classes. Central to that memory is George Bailey, ’17, a blind pianist who played the chimes from his graduation to the day before they were lost in flames.

Located next to the Observatory at the corner of 45th Street and 17th Avenue, the wooden tower burst into flames at 7 a.m. Embers descended upon Greek Row and many fraternity members grabbed garden hoses to save their houses.

Exposed to the fire’s intense heat, the 12 bells in the tower were permanently damaged, cracking when water from the fire hoses hit them. Though the cause of the fire remains a mystery, officials at the time hinted at arson.

Thus the chimes’ final tolling made headlines, just as their first peals were heard amidst controversy. The structure—originally the UW’s water tower—was transformed into a chimes tower in 1912 due to the efforts of Regent John A. Rea. He solicited a donation from fellow Regent A. J. Blethen, publisher of the Seattle Times and notorious for his connections to corruption in the Seattle police department. 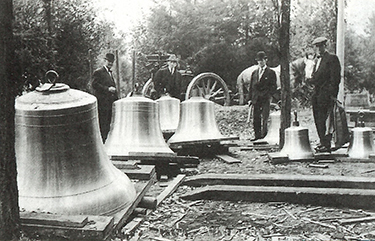 The 12 bells weighed a total of 15,000 pounds when they were installed in 1912. Checking out the bells’ arrival in this photo are several UW officials, including the later Dean of Students Herbert T. Condon, second from the left. UW Libraries photo.

Reform-minded students wanted the Daily to print a protest letter the day of the installation, but UW President Thomas Kane stopped the presses. An uproar followed over the students’ right of free speech. The students published their letter privately, distributed it on campus during dedication ceremonies, and were investigated by a faculty disciplinary committee. Though that committee recommended “measures of probation and reprimand,” the faculty eventually tabled the idea, much to the chagrin of several regents.

After the 1949 fire, the chimes were replaced by an “electronic carillon” installed in the basement of the Music Building. Its keyboard is connected to loudspeakers in Denny Hall’s tower. Bailey continued to play this carillon until his death in 1960. Afterwards, the bells gradually fell silent except for an occasional concert. Still functional, today they are heard tolling the time of day and on Commencement Day, when a piano student or professor plays songs of celebration and ceremony.