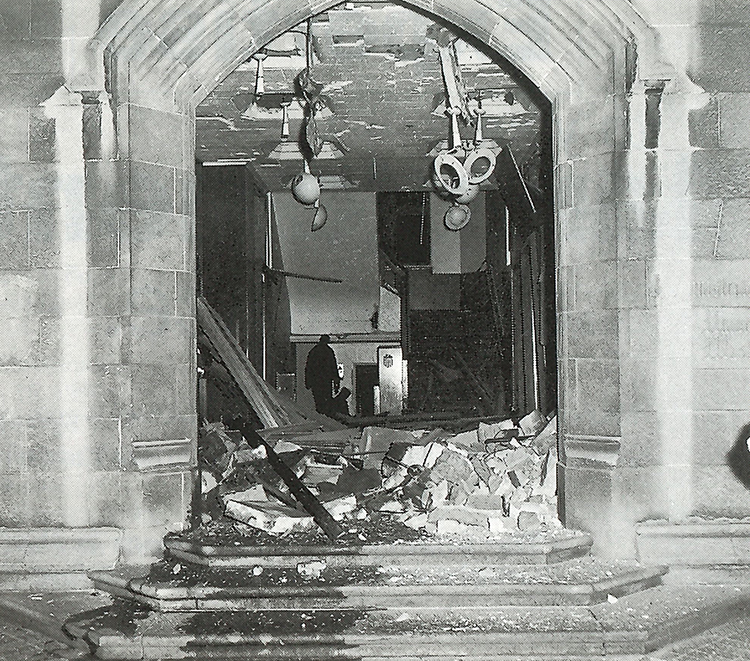 The main entrance to the Administration Building on June 29, 1969. Photo courtesy of UW Libraries Special Collections.

At 3:20 a.m. on a Sunday in June, a car with its lights off quietly drove across what is now called “Red Square” and parked next to the entrance of the UW Administration Building. It is likely that just one man got out of the car, put two cases of dynamite next to the front doors, lit a fuse, and sped away.

Ten minutes later, at about 3:30 a.m. on June 29, 1969, a terrifying explosion rocked the campus. UW Police Officer Don Reichel was in his patrol car on Memorial Way when the blast hit him. The wave lifted the rear end of his patrol car off the ground and blew his cap off. “I thought it was someone outside the car firing a shotgun. It was so loud it seemed that near,” he told the press.

The explosion blew a 4-foot hole in the steel-reinforced concrete floor of the entryway. The ceiling of a conference room below collapsed, breaking heating and water pipes. About 700 window panes were shattered, including Suzzallo’s stained-glass windows and leaded, colored panes in the Administration Building. Structures as far away at the Commodore-Duchess Apartments on 15th Avenue N.E. had shattered windows.

Fortunately no one was injured. A custodial foreman, Paul Siefner, was the only occupant in the building. At zero hour he was two floors below in the basement, shielded from the blast.

“The senseless destruction of the Administration Building today was an act of vandalism that defies understanding,” President Charles Odegaard said that day. “It is extremely fortunate that no one was killed or injured.” Odegaard was particularly proud of the staff of 75 employees that immediately came to campus, cleaned up what they could and opened the building for business Monday morning.

The Faculty Senate organized a $10,000 reward for information leading to the arrest of the bomber, and everyone from the Black Athlete Group to the UW Alumni Association contributed. Yet no one ever claimed responsibility for the blast, and no one was ever arrested.

But there was—and still is—a suspect. Retired UW Police Lt. Rex Houghtaling, who worked on the case with the FBI and Seattle Police Department, says there was a four-month investigation of one suspicious individual—a disgruntled UW student.

“This was not a protest against the Vietnam War or anything else,” Houghtaling recalls. “The best motive we had against him was that he was due to graduate that spring but he failed one course.”

He says investigators quickly put together the details of the bombing, including that the bomber probably used two cases of 60 percent dynamite. Police tracked down records showing that the suspect bought this type of dynamite at a Tacoma dealer prior to the blast.

“I was satisfied we were on the right track, but it was all circumstantial evidence. There was no direct evidence,” Houghtaling adds. “It was damn frustrating.”

Today the statute of limitations has long expired, and the $10,000 reward lapsed in 1971. Even the building’s name has changed: It’s now William P. Gerberding Hall to honor the recently retired UW president. But somewhere in the U.S.—perhaps that alumnus who sits next to you at football games—is the person who can finally answer the question, whodunnit?