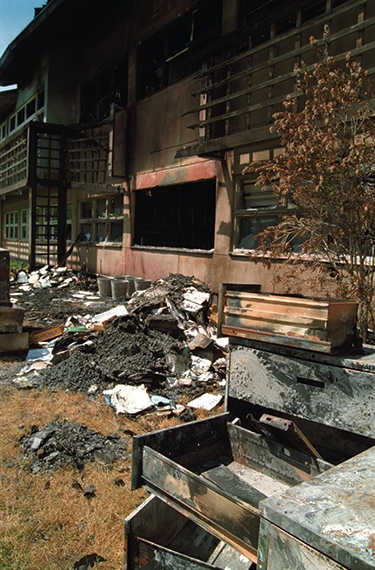 The fire destroyed the work space of 50 faculty members. Photo by Mary Levin.

Two defendants pleaded guilty Oct. 4 to participating in the firebombing of the UW Center for Urban Horticulture in 2001, one of a string of destructive crimes committed by members of the Earth Liberation Front (ELF) and the Animal Liberation Front, according to the U.S. attorney’s office.

Jennifer Kolar, 33, of Seattle, and Lacey Phillabaum, 31, of Spokane, promised to testify against other members of their group at future trials. Kolar faces five to seven years in prison. Phillabaum faces a three- to five-year term.

The arson on May 21, 2001, burned Merrill Hall beyond repair; severely damaged the Elisabeth Miller Horticulture Library; ruined the work space of 50 research faculty members, graduate students and staff; destroyed one-quarter of the world’s population of an endangered plant species; consumed decades’ worth of academic literature; closed cooperative extension offices; and melted hundreds of slides, including some illustrating the step-by-step recovery of Mount St. Helens.

It cost the UW $7 million in state funds and private gifts to rebuild the center. The underground group claimed it was targeting genetically engineered poplar trees belonging to Forest Resources Professor Toby Bradshaw. However, Bradshaw was using only traditional breeding methods in his own research. He had about 80 genetically engineered aspen trees, obtained by collaboration with a colleague in Oregon, growing elsewhere at the center. He has never released a genetically engineered plant of any kind into the environment. Of the ELF, he said at the time, “They’re unbelievably ignorant about science. We’re not dealing with the brightest pennies in the fountain, here.”

In the plea agreement, Kolar and Phillabaum explained how they met with Briana Waters, 30, of Berkeley, Calif.; Justin Solondz, 27, who is now a fugitive; and William Rogers, who committed suicide in an Arizona jail cell last year; to commit the crime. Waters was allegedly a lookout while the others attacked the building. Kolar said she cut the window glass at Bradshaw’s office. The two women said that Rogers and one other defendant went inside, placing incendiary devices in the office. Waters faces a trial next year on arson charges.