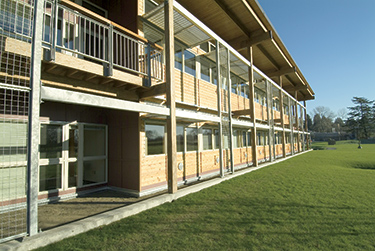 Sometime after 1 a.m. on May 21, 2001, someone broke into Merrill Hall at the UW Center for Urban Horticulture, planting an incendiary device that burst into flame and caused more than $1 million in damage. Four years later, U.S. Attorney Karin Immergut has charged three members of “the Family,” reputedly a secret eco-terrorist group, with conspiracy to commit arson.

Stanislas Meyerhoff, 28, of Charlottesville, Va.; Chelsea Gerlach, 28, of Portland, Ore.; and the late William Rodgers, formerly of Prescott, Ariz., were named in a 65-count indictment released Jan. 20 that detailed the alleged activities of 11 members of the Earth Liberation Front (ELF) and the Animal Liberation Front.

The group allegedly conducted a seven-year arson and vandalism campaign, including a 1998 fire at the Vail Ski Resort in Colorado that caused $12 million in damage.

The arrests were the result of a nine-year FBI investigation into cells of eco­-terrorists who allegedly target scientific facilities and commercial developments that, they feel, harm the natural world. The indictment listed 17 sabotage and arson incidents, including two in Washington state.

The three in the UW case were arrested Dec. 7 but not linked to the fire until the federal grand jury in Eugene, Ore., released its indictments. Meyerhoff and Gerlach are in custody; Rodgers committed suicide in jail last December.

The fire burned Merrill Hall beyond repair; severely damaged the Elisabeth Miller Horticulture Library; ruined the work space of 50 research faculty members, graduate students and staff; destroyed one-quarter of the world’s population of an endangered plant species; and melted hundreds of slides, including some illustrating the step-by-step recovery of Mount St. Helens.

A new Merrill Hall opened in January 2005 with more space than the original, while meeting “green” construction and design standards. The $7.2 million project included funding from the UW and state, as well as about $1 million in private donations.