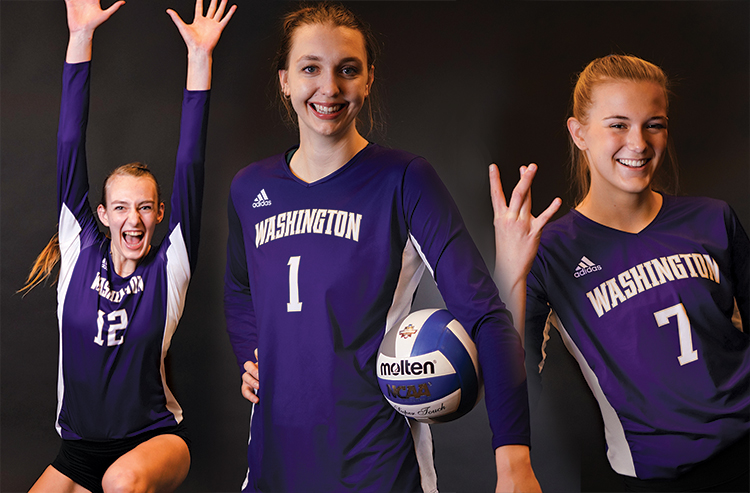 Every fall, you can count on several things happening in the Pacific Northwest: gorgeous weather, thousands of students returning to all three UW campuses, and the UW women’s volleyball team being in the hunt for a national championship. The Huskies have captured six Pac-12 championships—the Pac-12 is routinely considered the toughest conference in the nation—including in 2020-2021, when they reached the NCAA semifinals. So, it should not come as a surprise that three Huskies from that 20-4 team were named to the 2021 USA Volleyball Collegiate National Team—junior middle blocker Marin Grote, senior middle blocker Lauren Sanders and junior setter Ella May Powell.

“It was super exciting,” says Grote. “It has been a dream since I was a little girl to compete with the U.S. Olympic team. It is the chance of a lifetime, and so great to do it with two of my teammates. It was a great honor. When I got the email, I almost didn’t believe it. I was ecstatic, and I called my parents and, ‘Oh my gosh!’ It was very exciting to be nominated.”

The draw of the UW spans coast to coast, as Grote hails from Burbank, Calif., and Powell is from Fayetteville, Ark., while Sanders grew up nearby in Snohomish and attended Glacier Peak High School. And they all chose to play for the UW.

“Nothing could really compare to the people I met at Washington and the people I knew I would be playing with,” Sanders says. “I knew I would have really good teammates. And the location and the Husky fan base and being so close to home—knowing that was the right decision for me.”

But the honors for Husky women’s volleyball didn’t stop there. Assistant coach Leslie Gabriel, ’00, was named the National Assistant Coach of the Year by the American Volleyball Coaches Association. She played volleyball for the UW in the late 1990s and has been a UW assistant coach for 20 years.

“Each one of those three women are special,” Gabriel says. “To be part of the training session, it is awesome and great experience for them.”