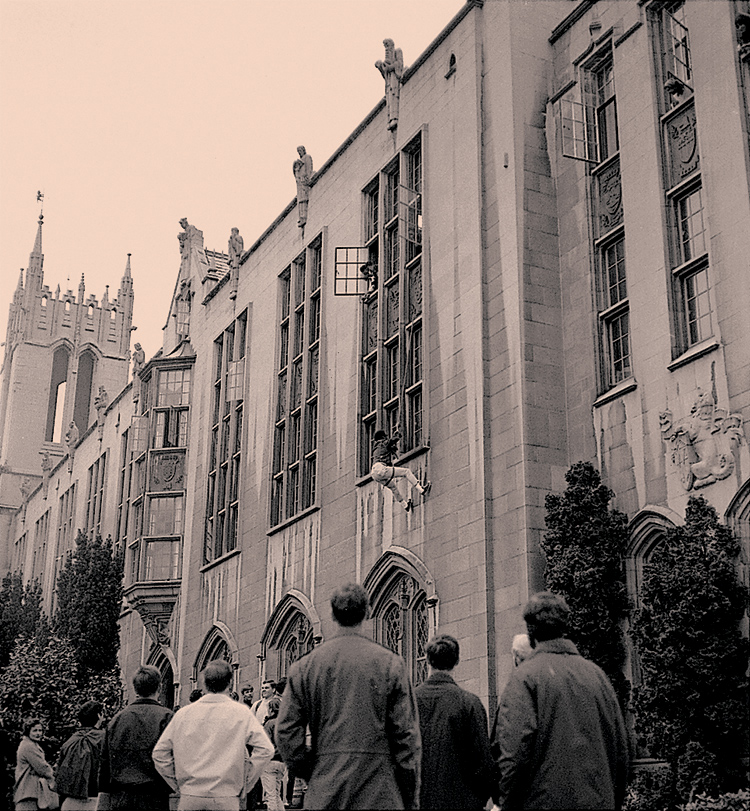 A member of the Black Student Union climbs up the side of Gerberding Hall during the May 1968 occupation of the president’s office. Photo by Bruce McKim, Seattle Times.

In the mid-1960s, only two of the UW’s 1,734 professors were African Americans. Students of color made up only 4 percent of the total enrollment that year. That began to change on May 20, 1968, when students from the Black Student Union (BSU) staged a sit-in at the office University President Charles E. Odegaard.

Founded in January 1968, the Black Student Union started with 13 students who came together after word of similar groups at California universities inspired them to launch a chapter at the UW.

E.J. Brisker, ’70, was its founding president, and other original members included Larry Gossett, ’71 (now a King County Council member); Eddie Demmings, ’75 (now the general counsel for New York City’s largest public employees union); and Eddie Walker (now a popular Seattle artist). Word of the group spread quickly as they recruited other minorities and even a large number of white students. Their goal: putting an end to what they labeled a “racist institution [and] its function to preserve and extend a racist status quo.”

The group’s first step was to submit a letter to President Odegaard with five “demands.” The BSU said the University must recruit and accept more minority students, start a black studies curriculum and recruit more African American professors and administrators. “We gave the University until mid-April to have our demands met or we were going to take the struggle to a higher level,” says Gossett. “It was not a revolutionary act, because it was happening at universities all over the country.”

By May 20, the group was growing tired of waiting. “President Odegaard told us it would take time, but we could not wait any longer,” Gossett says. “We saw no reason why a university that had been excluding us for 107 years couldn’t change now.”

At 4:55 p.m., close to 100 students marched from the Husky Union Building to the President’s office in what is now called Gerberding Hall. Thirty students crammed inside equipped with bedrolls, snacks and a transistor radio, while outside others rallied in the central plaza, shouting and waving signs of support. 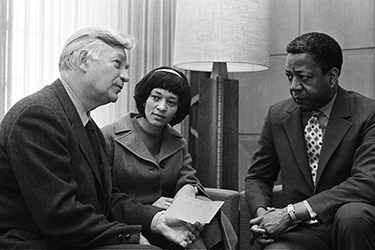 “I was up all night trying to help organize,” says Walker, who was one of two people later hoisted into the office by rope. “It was nice and dramatic.”

For all the planning, it was a short occupation. Three hours and 45 minutes later an agreement was reached. President Odegaard would address each request, and the BSU would make a presentation to the Faculty Senate a few days later.

“We left the University’s Administration Building in triumph,” Demmings says in a UWTV documentary. “We felt like we were on the road to getting what we wanted.”

By the end of that school year, 12 African Americans had been appointed to the faculty, six in full-time positions, four in clinical professorships, and two as visiting professors. Samuel E. Kelly,’71, was also appointed vice president of the “Special Education Program,” now known as the Office of Minority Affairs and Diversity.

Today that office is open to more than 12,000 students of color on campus, providing academic, financial and social support by way of tutoring programs, scholarships and counseling. The UW also has a Department of American Ethnic Studies, offering specialized classes for those interested in Asian American, African American, Latino and American Indian studies. More than 30 percent of the UW’s total enrollment are students of color and 11 percent of the 2007 freshman class comes from under-represented minorities. To mark the transformation, the Office of Minority Affairs and Diversity will celebrate its 40th anniversary by holding a “celebration of diversity” on Tuesday, May 20, in Red Square.

To this day, the Black Student Union continues to be an active organization on campus. “We survived,” Walker says, “and after nearly 40 years, I’m glad that [we can] still persevere to be agents of cultural change.”