A contest and a whim inspired UW’s fight song 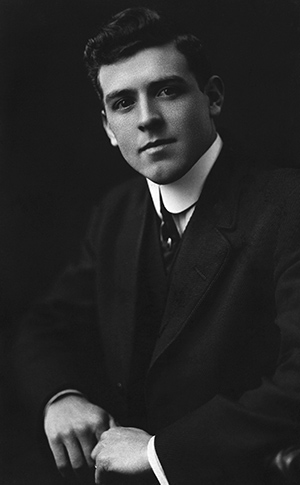 Even though he couldn’t read music, UW student Lester J. Wilson wrote Bow Down to Washington after reading about a fight song contest in The Daily. Photo courtesy Polly Kemp.

Lester J. Wilson was a Kansas farm boy, couldn’t read music, never graduated from college, worked as a “sand hog” in a copper mine, managed a Woolworth’s for $15 a week and loved to fish.

Hardly the credentials you would attribute to someone who is credited with composing one of the most heralded school fight songs in the land. But on a whim, Wilson, who enrolled at the University of Washington in 1909 some years after his family moved from the Midwest to Seattle, wrote Bow Down to Washington.

The song, written in 1915, is considered by many to be one of the best fight songs in the nation. Famous newspaper columnist and radio broadcaster Walter Winchell proclaimed that it was the most inspirational college song ever written. The San Diego Journal concurred, declaring that “it is generally agreed that Bow Down is the greatest college fighting song.” While not quite as enthralled, William E. Studwell, a professor at Northern Illinois University, ranked Bow Down among his top 25 college fight songs in a book he recently wrote on the subject.

Wilson’s inspiration for the song was based on a die-hard passion for his school—that and the $25 first prize offered by The Daily in its contest to have someone write a fight song for the UW for the coming UW-Cal football game.

“He entered the contest for the pure fun of it, never thinking he’d win,” explains his daughter, Polly Kemp of Denver. “He was an original, talented and creative young man.”

And how. Wilson stayed up all night before the contest deadline working on the song. Since he couldn’t read music, he actually had a friend put the song to paper since Wilson—who could play just about any instrument—played it by ear.

The song was to debut at the Nov. 6, 1915 UW-Cal game in Berkeley. Three hundred rooters and 20 Husky band members practiced the new song as they rode down to California on a specially scheduled steamship. The debut was a smashing success: the Huskies won the game 72-0.

Bow Down was first heard at UW’s Denny Field a week later. Sitting at an upright piano placed at midfield at halftime, Wilson played Bow Down against the same Cal Bears. Lo and behold, the song’s magic worked again – the Huskies won 13-7. The song coincided with the Huskies’ rise to national prominence in college football.

Wilson copyrighted the song and turned proceeds over to the University. And while Bow Down became a lasting hit, Wilson was a big success in his own right. An outstanding athlete, he spent summers building bridge piers for railways, writing songs for his fraternity, and playing piano for silent movies at the Bell Theater in Seattle. But Wilson didn’t graduate from the UW. He left college to work at a Woolworth’s and later became president of a San Diego department store.

“He had a gift,” his daughter says. “He was competitive and loved to excel.”

As they have for 85 years, the words and music of Bow Down still inspire legions of Husky fans nationwide. Well, except for one brood—no one else from Wilson’s family attended the UW.