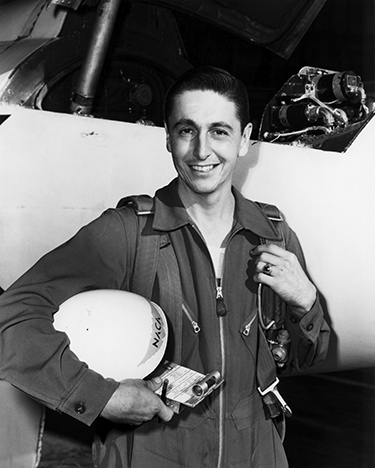 A. Scott Crossfield after his historic Mach-2 flight.

To UW students, faculty and the aeronautics community, legendary test pilot A. Scott Crossfield, ’49, ’50, was the fastest man alive—the first person to fly at twice the speed of sound and a pioneer in space exploration.

The Berkeley, Calif, native died in the grips of the same activity that sparked his passion and brought him international fame and glory. He was found dead April 20 amid the wreckage of his Cessna 210A plane after it went down in severe weather about 50 miles northwest of Atlanta. He was 84.

Crossfield was a master of the sky. In November 1953, he became the first person to fly at Mach 2, or about 1,300 mph, in a Douglas D-558-II Skyrocket. Two years later, he left his position as a research pilot with the National Advisory Committee for Aeronautics to help design the dangerously innovative X-15 rocket plane—the same plane that sent him 16.7 miles above Earth at a speed of Mach 2.97—about 1,960 mph-in 1960.

Crossfield arrived at the UW prior to World War II, but soon left to serve as a Navy fighter pilot and instructor. After the war, Crossfield completed his bachelor’s degree in aeronautical engineering and master’s degree in aeronautical science at the UW. During his studies, he helped test new aircraft models on campus in the Kirsten Wind Tunnel, which was designed and built by UW Professor Frederick Kirsten in 1934.

Although he was an acclaimed test pilot, Crossfield’s roots in aeronautical engineering carried him through the rest of his career. He worked as an executive for Eastern Airlines and Hawker Siddeley Aviation, as well as serving as a technical consultant to the House Committee on Science and Technology until he retired in 1993. “I am an aeronautical engineer, an aerodynamicist and a designer,” Crossfield said in a 1988 interview with Aviation Week & Space Technology. “My flying was only primarily because I felt that it was essential to designing and building better airplanes.”

Among his many honors, Crossfield was inducted into the National Aviation Hall of Fame (1983), the International Space Hall of Fame (1988) and the Aerospace Walk of Honor (1990). He received the Smithsonian National Air and Space Museum Trophy for Lifetime Achievement in 2000. His autobiography, “Always Another Dawn: The Story of a Rocket Test Pilot,” details his life through his X-15 flight years.

Crossfield is survived by his wife of 60 years, Alice; six children; and two grandchildren.