A stroke of genius saved countless lives with dialysis 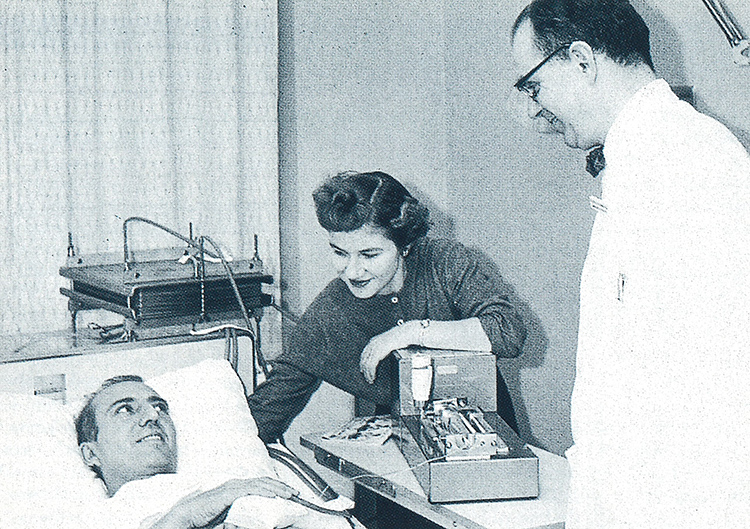 Belding Scribner (right) pioneered the use of dialysis for patients suffering from kidney disease by inventing a shunt that could be hooked up to a dialysis machine. Photo courtesy of UW School of Medicine.

In 1960, kidney failure meant certain doom. Dialysis—the filtering of blood by an artificial kidney—was considered experimental, and of use only for a few days at a time. But a UW physician had an idea in the middle of the night.

Belding Scribner, a professor of medicine at the UW School of Medicine and a dialysis pioneer, was certain that long-term dialysis could be developed to save people’s lives.

At the time, dialysis only took place in an operating room. It preserved the life of patients with temporary kidney failure, keeping them alive until their own kidneys returned to normal. Glass tubes had to be inserted into a patient to connect them to the artificial kidney, and were removed when dialysis was done. Patients whose kidneys did not recover soon died.

Scribner was haunted by the death of a Spokane patient who briefly made a dramatic recovery while on dialysis, and thought about the case constantly. “I literally woke up in the middle of the night with the idea of how we could save these people,” he recalls.

His idea: insert a Teflon tube in the patient’s artery and vein, and keep access open by hooking the tubes together to create a high blood flow “shunt.” During dialysis, the shunt would be pulled out and replaced by lines to the artificial kidney machine.

Clyde Shields, a 39-year-old Boeing machinist dying from incurable kidney disease, was the first to receive the shunt on March 9, 1960, at the UW Medical Center. Shields lived for 11 years on intermittent dialysis. “Suddenly,” Scribner says, “we took something that was 100 percent fatal and overnight turned it into 90 percent survival. To say the least, no one was prepared for it.”

With dialysis facilities very limited, developing a home dialysis unit was the next step. With the help of UW Engineering Professor Albert L. Babb, a prototype home dialysis unit was created. “We were doing bioengineering before it was known as that,” Scribner says. The first unit was about the size of an upright piano and had two noisy proportioning pumps. Nurses and patients alike dubbed it “the monster.” To this day, home dialysis—which treats approximately 20,000 patients—is considered one of the bioengineering breakthroughs of all time.

But in the ’60s, dialysis was considered experimental and didn’t have much support. Perhaps the biggest problem in the early days of dialysis was ethical. Given the limited availability of facilities, how were the few patients who could receive treatment to be chosen from the many who needed it to stay alive?

Swedish Hospital was the home of the world’s first community dialysis unit. The service arm of Scribner’s program, it was called the Seattle Artificial Kidney Center. When it opened in 1962, it had three beds and could handle up to 12 patients. Unfortunately, there were 60 patients in need for those 12 openings.

For several years, a committee composed of a minister, housewife, lawyer, banker, state government official, labor leader and surgeon were given the unenviable task of deciding which applicants would be admitted to the kidney center. The committee, whose members remained anonymous, came to be known as the “Life or Death Committee.” (It dissolved in 1967 because its function was no longer necessary. Home dialysis had taken off, freeing more beds in the center.)

On one occasion, the committee denied treatment for a 16-year-old high school honors student. Scribner and Babb couldn’t live with the prospect of the student’s death, but they didn’t want to circumvent the authority of the committee—which was set up by the King County Medical Society. So they worked up a typically academic solution. They would develop a home unit to treat the honors student as a UW research project. Since it was experimental, it would not be subject to the committee’s rule.

Today, on the eve of the 50th anniversary of the UW School of Medicine, the UW’s George M. O’Brien Kidney Research Center is a leader in the field. And it—along with thousands of patients over the years—owes a lot to a certain idea in the middle of the night that came to Belding Scribner.