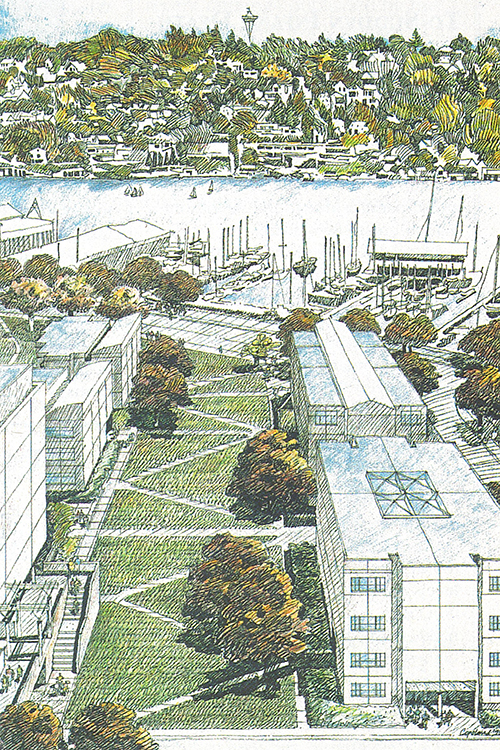 An artist’s rendering of what the Southwest Campus Vista may look like from the plaza of the Physics/Astronomy Building. Seattle’s Space Needle will anchor this view, just as Mount Rainier anchors Rainier Vista. Drawing by Lee Copeland.

The Seattle City Council voted in May to approve the University’s master plan for its Southwest Campus—completing a five-year process. An earlier master plan for the rest of campus took only three years.

Among the key elements in the plan is a new, waterside site for the fisheries salmon pond; a new pedestrian mall; a scenic vista overlooking Portage Bay similar to Rainier Vista; and building sites for up to 600,000 square feet of new construction.

Most of the new space will serve oceanography, fisheries, health sciences, bioengineering and the biological sciences. A pedestrian bridge over Pacific Street is planned to link the development to the new Physics/Astronomy Building.

The street grid south of Pacific Street will change under the new plan. To make way for the vista and academic facilities, 15th Avenue NE will be relocated to the west and the last block of University Way will be vacated.

The long-sought approval gives the College of Ocean and Fishery Sciences a chance to consolidate operations that are currently housed in 23 different buildings on and off campus. For example, a new fisheries building will make it possible for faculty and students to concentrate in one place. Across the street from the planned building, new fish ponds, tanks and a research hatchery will take the place of the Bryant Building, the long, low building that blocks access to a third of the southwest waterfront.

Consolidation is also a concern for School of Public Health and Community Medicine and disciplines in the life sciences, including botany, molecular biotechnology and bioengineering.

The plan creates an area that is different from Upper Campus partly because community members argued convincingly that people wanted a mix of public and private uses along the waterfront.

The plan includes the following:

All these changes come in an area that is completely within existing UW boundaries—the UW never sought to enlarge Southwest Campus in this planning process. Except for the Jensen Motor-Boat Co., the UW owns all the property.