Alaskan land once was much farther south 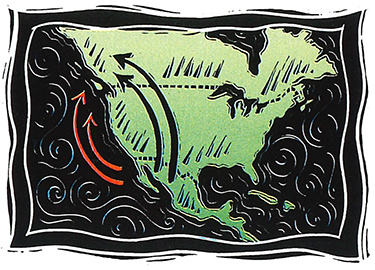 What today are rainy British Columbia and chilly southern Alaska were once the sunny climes of Baja California, according to UW Paleontologist Peter Ward.

Ward and his colleagues reported in September that they found fossil shells of an extinct mollusk on two islands off the eastern coast of Vancouver Island. The discovery gives clear evidence that the region was once nearly 2,000 miles to the south.

“That is fast, but not science-fiction fast,” says Ward.

Such a huge land mass, he says, must have slipped its way north along a giant crustal fault stretching from California to British Columbia. The UW researcher believes the fault is certainly extinct, and because it is buried deep in the Earth’s crust, it may never be detected.