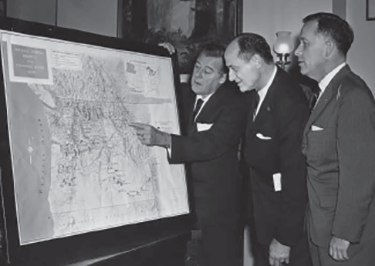 Without the help of politician Albert Rosellini, ’32, ’33, who died Oct. 10 at the age of 101, the University of Washington School of Medicine might not exist today. Employing his trademark decisiveness and ability to collaborate, the former state senator and governor was responsible for making the UW schools of medicine and dentistry come true.

For decades, the idea of starting a medical school at the UW never took root due to lack of money and support from the local medical community.

As far back as 1916, UW President Henry Suzzallo proposed the development of a two-year medical school only to see the idea fizzle, according to Fulfilling the Dream: A History of the University of Washington School of Medicine by Clement Finch, a medical school faculty member for more than 60 years.

But things changed. The Board of Regents in 1944 gave its approval for both a medical and dental school and Rosellini used his political smarts to present a bill in the state senate in 1945. It passed with only one dissenting vote.

“We have Albert Rosellini to thank [for the School of Medicine],” says Dr. Jack Lein, ’55, retired vice president for UW Health Sciences. “He was a heavyweight in the state and a likeable guy.”

Gifts in Gov. Roselllini’s memory be sent to the UW Foundation for the Albert D. Rosellini Endowed Scholarship in the School of Medicine, Box 358045, Seattle, WA 98195; or to the Gov. Albert Rosellini Memorial Scholarship in the UW’s Italian Studies Program, UW College of Arts and Sciences, 050 Communications Building, Box 353765, Seattle, WA 98195.