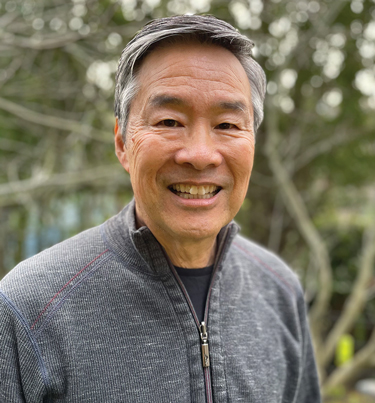 It started with a call from a former Microsoft senior executive on a Sunday in the mid-1990s. “Scott Oki reached out to me and said, ‘There’s this new project that is starting to collect the stories of Japanese Americans,” says Ikeda, who grew up with Oki in Rainier Valley. “It just seemed like the perfect match.”

Ikeda studied chemistry, chemical engineering and business at the UW and spent his early career working for IBM and Microsoft. Each academic discipline supplied him with the essential tools to lead Densho: His chemistry degree taught him to start with a hypothesis and test it, chemical engineering helped him grapple with large-scale infrastructure, and his MBA gave him the financial skills for managing a nonprofit organization.

Entranced by technology, he saw the future of storytelling taking place on the personal computer screen. “The mantra was that information should be at your fingertips … it was the water I would swim in every day at Microsoft,” Ikeda says.

Still, elders in the community encouraged Densho leaders to create VHS copies or printed transcripts of interviews to distribute to libraries across the nation. “This whole concept of a digital, online presence —they just didn’t understand. Even when I explained it to them, they said, ‘That sounds so pie in the sky.’ ”

But Ikeda’s decision to create a “museum without walls” paid off. Each year, Densho showcases its rich content to roughly 1 million visitors. Even before COVID-19 lockdowns, most Seattle museums saw far fewer in-person annual visits. “When I go to museums,” Ikeda says, “you don’t see very many younger people. They’re accessing this information online.” Spreading the word about Japanese American incarceration to young people is key for Densho, especially since Washington schools do not include it in the core curriculum.

“Education is a confounding issue,” Ikeda says. School districts make their own decisions about which subjects are taught, so advocating for the inclusion of Japanese American history isn’t ideal. Instead, Densho partners with TED-Ed to reach larger audiences with digitally accessible learning modules. “My thinking has been, let’s make it as easy as possible to make these materials available.” 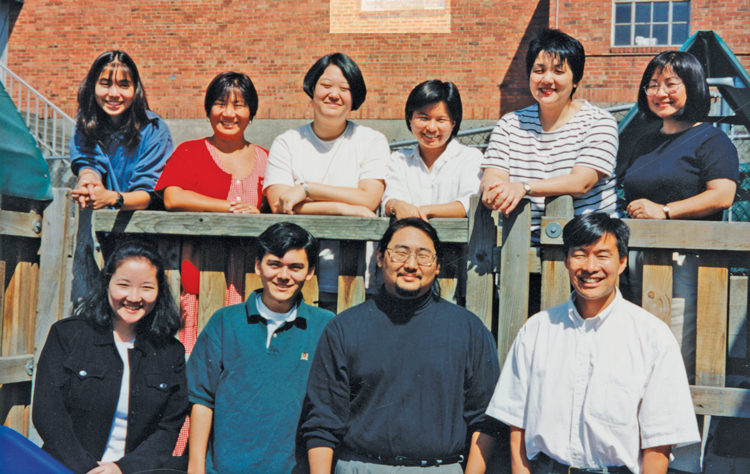 Ikeda attributes some of Densho’s success to Japanese American community leaders like Aki Kurose. He recalls a town hall in the early days, where some community elders expressed concern for the project, and were reluctant to tell their stories and relive the pain of the war. Kurose knew her influence. “She would say loud enough for people to hear, ‘Tommy, what you’re doing is the best thing possible that we need. Thank you for doing this.’ ”

As it turned out, sharing their stories became a healing process for interviewees. Some recounted memories for the first time. Martha Nishitani, who owned a dance studio on University Way Northeast for decades, broke out in tears after her interview. Ikeda recalls her saying, “Now I can die, because my story has been told.”

Eighty years after internment began, most potential storytellers have died. Densho will continue sharing and preserving survivors’ stories and showing up as an ally for other vulnerable communities. But when it comes to the future, Ikeda maintains his “pie-in-the-sky” thinking.

“We are this really interesting treasure that is still waiting to be discovered by people in the academic world,” he says. Densho’s archive contains more than 111,000 photos and objects, as well as thousands of hours of video interviews. “With machine learning and data science, you have different ways of looking at these digital archives. It’s ripe for new things to happen.” 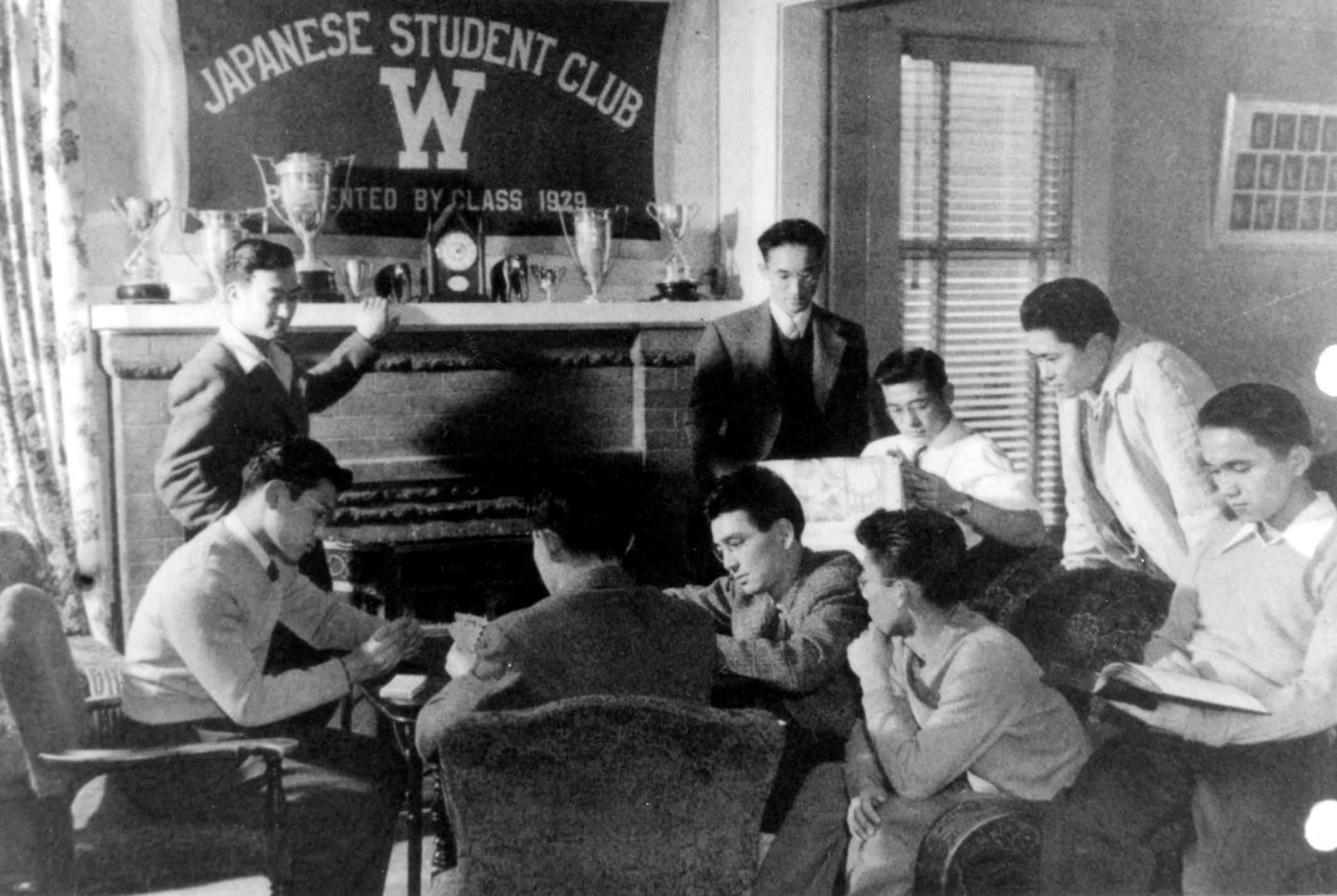 Members of the Japanese Students Club pose in front of the clubhouse fireplace. The JSC was started in the early 1920s. Japanese Americans were excluded from the Greek-system fraternities because of their Japanese ancestry. (Photo obtained from Densho, courtesy of the UW Nikkei Alumni Association)

What happened to Japanese Americans in World War II?

On February 19, 1942, President Franklin D. Roosevelt signed Executive Order 9066. More than 120,000 Japanese Americans were forced into concentration camps, then euphemistically referred to as “relocation centers.” They were given short notice to sell their land and possessions for a fraction of their real value. When the Japanese American community returned years later, many of their businesses were vandalized or destroyed.

Executive Order 9066 was considered a response to the Japanese attack on Pearl Harbor months earlier, but U.S. intelligence deemed there was no military necessity to imprison Japanese Americans. Instead, the mass incarceration was fueled by racism, poor political leadership and wartime hysteria.

“It still was a raging debate up until F.D.R. signed E.O. 9066,” says Ikeda. “The lawyers in the Justice Department felt that it was wrong, and they were pushing back. But the War Department was more powerful, and they were pushing stronger. I truly believe if there had been more people standing up for Japanese Americans during World War II, it could have changed things.”

Even before E.O. 9066, inflammatory anti-Japanese sentiment ran rampant in major media outlets like The Seattle Times and the Seattle Post-Intelligencer.

Four decades later, President Ronald Reagan would sign the Civil Liberties Act of 1988, which declared a “grave injustice” had been done unto Japanese Americans during World War II. Those who had been convicted of violating E.O. 9066 were pardoned, and $20,000 in reparations was provided to each individual affected by anti-Japanese discrimination.

Densho exists to share the true stories of incarcerated Japanese Americans in hopes of creating a better future. History doesn’t repeat itself, Ikeda often says, but it sometimes rhymes.

From protesting at the U.S. Immigration and Customs Enforcement (ICE) center in Tacoma, to standing in solidarity with American Muslims after terrorist attacks on September 11, to speaking out against the “Muslim ban” in 2016, Ikeda believes allyship can save our community from xenophobia. “What we find is it actually makes a difference,” says Ikeda. “When Japanese Americans are there, and we tell our story and how unfair that was, and how we are standing with this community because we think the same thing is happening, it registers more strongly.”

It certainly worked for President George W. Bush. Congressman Norm Mineta spent hours sharing his World War II incarceration story with President Bush at Camp David months before the September 11, 2001 attacks. The day after 9/11, Bush stood firmly against calls for flight bans or camps for Arab Americans. “We want to make sure that what happened to Norm in 1942 doesn’t happen today,” Bush said.

“I have always believed that great nations do not ignore their most painful moments – they confront them with honesty and, in doing so, learn from them and grow stronger as a result,” wrote President Joe Biden on this year’s Day of Remembrance. “The incarceration of Japanese Americans 80 years ago is a reminder to us today of the tragic consequences we invite when we allow racism, fear and xenophobia to fester.”