Amid tragedy, a ribbon of hope 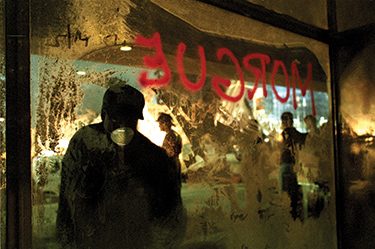 This is an issue I never planned—or wanted—to write and edit. The December 2001 Columns was supposed to have a gorgeous picture of the ocean on the cover as we boasted about a $250 million, UW-led project to explore the depths of the Pacific.

But like our lives and our nation, all that changed on Sept. 11. For those of us in the UW community, tragedy and grief were compounded on Sept. 12, when a planeload of 16 Husky alumni and fans crashed in Mexico, taking the lives of all aboard. While I didn’t know anyone who died in the terrorist attacks, I did know some of the passengers on that private tour plane.

The day after the crash, the local media descended on the Alumni House for reaction shots and quotes. Unfortunately, Executive Director John Buller, ’69, ’71, was stranded in Florida due to the air space closure. Since I knew some of the victims, I became the spokesperson for alumni association reaction.

So began a 10-hour whirlwind of interviews—four TV stations, four newspapers, a public radio station, wire services and even the trade journal for higher education. Having been a daily newspaper reporter, I have participated in these media onslaughts. But now I was on the other side of the camera and microphone. Still reeling from grief over our national tragedy and my personal loss, I had to somehow remain coherent in what would become 10-second sound bites. It was an ordeal I will never forget.

The next day, Columns Associate Editor Jon Marmor and I sat down to discuss the December issue. We immediately ripped apart the original plan for the issue, canceling two features. Even though we were only two weeks away from our editorial deadline, we started over on the special issue you now hold in your hands. Jon faced his own ordeal in the next two weeks—contacting the relatives and friends of those lost in the plane crash. What came out of those interviews is a series of touching memorials for each victim in “Remember the Huskies.”

I started tracking down UW alumni, faculty and staff to write their perspectives on Sept. 11 and found a surprising number of connections. Samantha Appleton, ’97, a free-lance photographer, was allowed to photograph Ground Zero at night and sent us incredibly moving shots, such as the photo on this page. One of the UW’s federal relations officers, Elaine McCusker, was an eyewitness to the Pentagon attack. Inside that building at the time was the only member of the UW community who would die in the terrorist attacks—Army Sgt. Maj. Larry Strickland. The architect who designed the World Trade Center towers was a UW alumnus. The connections continue, more than we could trace in the print version, but told in detail here on the Columns Web site.

One last hurdle was the cover. How could we express the experience of a dual tragedy without diminishing either loss? Columns Art Director Ken Shafer came up with an elegant yet simple solution: a memorial ribbon, one half red, white and blue and the other half purple and gold.

Ten weeks after the terrorist attacks and the Husky plane crash, some of you might not feel like reading more accounts of these tragedies. But the remarkable thread through all of this is the impact of the University of Washington. In these personal stories, you will find a worldwide institution that has changed the lives of so many—and given us hope. If this world is ever going to get back to “normal” again, the UW will be part of that change, too.