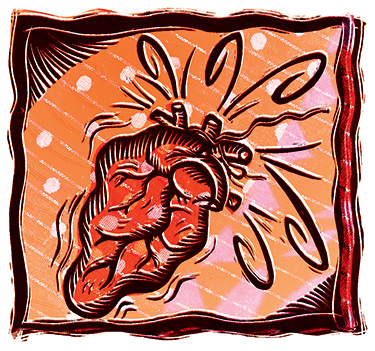 In 1989, a Finnish doctor rocked the medical establishment when he hinted that a bacterium might be responsible for some types of heart disease. Pekka Saikku reported that 60 percent of his heart patients carried the antibody to Chlamydia pneumoniae while only 20 percent of his healthy subjects carried it.

This came six years after two doctors in Australia announced that a bacterium was responsible for stomach ulcers — a finding that the medical establishment disregarded for years until the doctors were proven right.

Could bacteria also be a culprit in heart disease? Studies had already proved that all U.S. adults have been exposed to C. pneumoniae, which spreads through the air and causes pneumonia or mild respiratory disease, at some point in their lives.

In 1999, the National Institutes of Health and the Pfizer Corp. launched an $11-million study to see if treatments with antibiotics could stem heart disease and asked the UW to head the effort.

In April the UW released the first results of the study — and the verdict so far for C. pneumoniae is not guilty. Taking antibiotics weekly for a year does not reduce the risk of a heart attack for patients with stable coronary artery disease, according to the article published in the April 22 New England Journal of Medicine.

The researchers randomly assigned 4,012 men and women to receive once-weekly doses of either Azithromycin or a placebo for one year. After an average follow-up of 3.9 years, there was no significant reduction of cardiac “events” — death, heart attack, unstable angina, angioplasty or cardiac surgery — among those receiving antibiotics compared to those given a placebo.

The results applied to all participants, regardless of age, gender, smoking status or presence of the C. pneumoniae antibody. The treatment also had no effect on death rates or on incidence of stroke.

“This is conclusive evidence against using antibiotics to treat late stages of cardiovascular disease,” says Epidemiology Professor J. Thomas Grayston, the study’s principal investigator. But he added that this study looked at treatments for heart patients, not at the causes of heart disease. “The results do not tell us anything about a possible role of C. pneumoniae in the early development or acceleration of disease in the coronary arteries. More study is needed,” he says.

Grayston’s results are confirmed and extended by the similar negative findings of the PROVE-IT trial, published in the same issue of the New England Journal of Medicine. That study tested a different antibiotic and used a different treatment schedule with participants, but had a similar outcome.

Grayston, the founding dean of the UW School of Public Health and Community Medicine, discovered the bacterium during UW research in the 1960s. He isolated it from throat cultures taken from students at Hall Health. He never thought it was connected to heart disease. After the Finnish study linked C. pneumoniae to coronary disease, he told an interviewer it was like finding out that an old acquaintance might be an ax murderer.