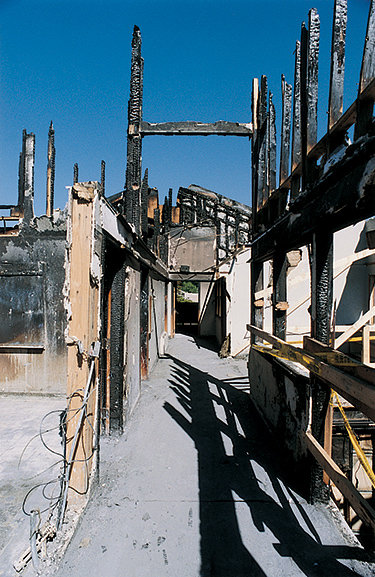 “Eco-terrorists” burned down one building in the Center for Urban Horticulture complex in an early morning attack May 21.

Arsonists burned down Merrill Hall, part of the UW Center for Urban Horticulture, May 21, causing $4.1 million in damage and destroying offices, research facilities and the center’s library. It was the most costly attack on UW facilities since the Vietnam War protest era.

An “eco-terrorist” group called the Earth Liberation Front (ELF) took credit for the arson, stating that it targeted the work of UW Research Professor H.D. “Toby” Bradshaw, who studies the genetics of poplar trees. At the same time the urban horticulture center was attacked, arsonists set fire to a poplar tree nursery near Clatskanie, Ore., and the ELF claimed responsibility for that attack as well. The group has said it has been the source for many arson attacks, including a 1998 blaze at Colorado’s Vail ski resort that caused $12 million in damage.

In a communiqué released May 31, the ELF called Bradshaw “the driving force in G.E. tree research” and claimed that he “continues to unleash mutant genes into the environment that is [sic] certain to cause irreversible harm to forest ecosystems.”

While a small portion of Bradshaw’s research involves studying gene-altered tissues, almost all of his work focuses on traditional plant hybridization techniques. “I have never genetically engineered a tree, much less released one into the environment,” he stated. The forestry professor estimates that, since 1995, he has worked with 80 transgenetic tissue samples compared to about 15,000 poplar seedlings bred traditionally. These “transgenic” samples are purely experimental and never leave the lab.

Fast-growing poplar trees, which have been bred traditionally, are being raised on plantations as an alternative to logging forests for wood fiber. Bradshaw says poplar cultivation is a net environmental benefit that will help ease logging pressure on other forests.

While Bradshaw’s office was destroyed, much of his research was saved and the scientist vowed to continue his exploration of the genetics of poplar trees. “ELF firebombings are hate crimes against those of us whose missions in life are to increase human knowledge and bring a sense of wonder to the classes we teach,” he wrote in a letter to the Los Angeles Times.

Located at the eastern edge of the campus near Union Bay, the Center for Urban Horticulture opened in 1984 to support teaching, research and public service in plant biology in an urban environment. Many of its facilities, including Merrill Hall, were built with private gifts.

The fire crippled many research and public service programs supported by mainstream environmental groups. For example, approximately one-fourth of the world’s supply of an endangered plant species, the showy stickseed, went up in flames. A specialist on endangered plant species, Forest Resources Research Professor Sarah Reichard, was trying to understand stickseed biology to help restore the species to its Cascade environment.

Slides and research material on the recovery of Mount St. Helens after its 1980 eruption were destroyed in the fire. Public outreach programs sponsored by WSU Extension-King County, including coordinating master gardeners and pea-patch gardens for the working poor, were also harmed.

“The University of Washington condemns this senseless act of arson that has destroyed decades of scientific inquiry aimed at improving the overall health of urban ecosystems. This misguided act has set back research concerning endangered plants in Washington, rehabilitation of degraded wetlands and even assistance for home gardeners. It is a vicious blow to some very gifted and dedicated faculty and students,” says Provost Lee Huntsman.

The state Legislature appropriated $4.1 million in emergency funding in its 2001-03 operating budget and the UW hopes to cover other construction costs from private and corporate donations. Engineers have determined that the bulk of Merrill Hall, the center’s main building, must be razed. The section added to Merrill Hall that housed, among other things, the library and herbarium will remain but requires extensive repairs. For more information on the Urban Horticulture Recovery Fund, contact Linda Kaye at (206) 543-9505.

UW police are working with the FBI and other agencies to track down the arsonists. As of mid-August, no one had been charged with the crime.