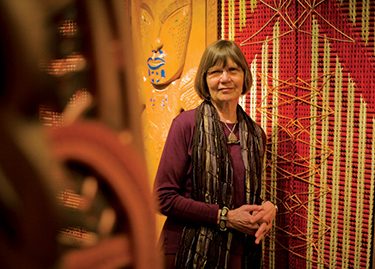 I stopped by the University Book Store to pick up a copy of Ellen Dissanayake’s Homo Aestheticus and realized I had no idea where to look for it. Dissanayake trained as an art historian, but her books have probably been most influential among anthropologists and evolutionary psychologists. And she’s an affiliate faculty member at the UW School of Music.

I finally found her, shelved under art history — where her presence must make some of the other books uncomfortable. Dissanayake is given to pronouncements like, “The arts of our time aren’t the things hanging in the ‘high art’ galleries. The arts of our time are advertising, blockbuster movies and participatory rituals like the Super Bowl or the opening ceremony of the Olympic Games.”

The fact is that Dissanayake’s books have no proper shelf — yet — because she is working in a field she invented: evolutionary aesthetics, the study of art-making as an innate human behavior that helps us survive. It’s a young but burgeoning discipline. “There are a number of us attempting to mount a Darwinian analysis of art and the aesthetic response,” says Denis Dutton, whose book The Art Instinct is a huge seller right now, “but Ellen originated it. The freshness of her thinking is sometimes astonishing.” Academia hasn’t always known where to shelve Dissanayake, either. For years, no publisher would take a chance on a book called What Is Art For? by a woman without an institutional affiliation. And no school would take a chance on “a scholar without a department” and only a master’s degree for a credential. Even after she’d made her reputation in multiple fields, Dissanayake was still paying the bills with hourly work as a transcription typist.

We live in an interdisciplinary world. A cormorant moves from the sky to the riverbank to the river bottom to the ocean without ever feeling out of its depth — unlike, say, a geologist. We show the same versatility in our daily lives, where a trip to the bank might require English, math, economics, pop culture (if the teller is chatty) and psychology (if the teller is passive-aggressive). Why should academia be so rigidly sub-specialized?

It isn’t always. Indeed, it’s no surprise that Dissanayake’s current institutional affiliation is the University of Washington — a school that has led the way in promoting scholarly cross-pollination. Examples abound: In Condon Hall this semester, the English department has novelists giving craft lectures to chemistry majors as part of a new “Writers on Writing” course. Down on Pacific Street, the Foege Building is full of common areas designed to get scientists, engineers and physicians talking and collaborating. And then there’s the forthcoming College of the Environment.

“Accept the university of death,” the poet Gwendolyn Brooks wrote, reminding us of a second meaning that “university” has historically carried — the totality, the whole. Scholars like Ellen Dissanayake remind us that we do our work not only at the University of Washington but in the university of life.