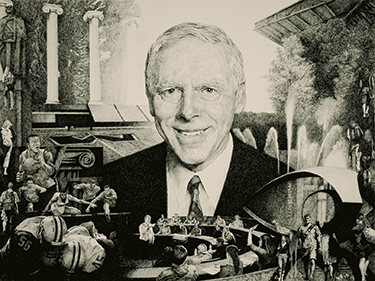 Artie Buerk, ’58, graduated from the University of Washington nearly five decades ago, but he never really left; he has dedicated countless hours to serving on or leading UW committees and boards, making important connections among those who support the UW. For his tireless volunteer efforts, Buerk received the Gates Volunteer Service Award at the Sixth Annual Recognition Gala on Sept. 7.

“He has such a deep and profound love and affection for the University,” says UW President Mark A. Emmert, ’75. “I think he does all these things because he knows the impact the University had in his life and he wants it to have that same impact for other people.”

Buerk is the advisory board chairman of the Michael G. Foster School of Business and an advisory board member of the Information School. He is a past president of the UW Alumni Association and a former director of the UW Foundation.

“He is the UW’s senior ambassador. There’s no question about it,” says Chuck Blumenfeld, ’66, ’69, executive director of the UW Alumni Association. “When you think about Artie’s contribution to the University, it’s much more than just the monetary contribution. It’s his undying spirit, his enthusiasm, his advocacy for the University.” Artie is known for never forgetting a name or face and for making lifetime friends.

A managing director with the private equity firm Buerk Dale Victor LLC, Buerk has been a generous supporter of the University, most notably the Foster School of Business, where he created the Buerk Leadership Endowment. “He is a great leader and he leads in his own style,” says Jim Jiambalvo, dean of the school. “His style is based on his passion—and that’s networking.”

The Gates Volunteer Service Award, presented by the UW and the UW Foundation Board, recognizes volunteers whose efforts have encouraged others to support the UW through time, service and philanthropy.