As terns struggle to feed their young, biologist sees a warning sign 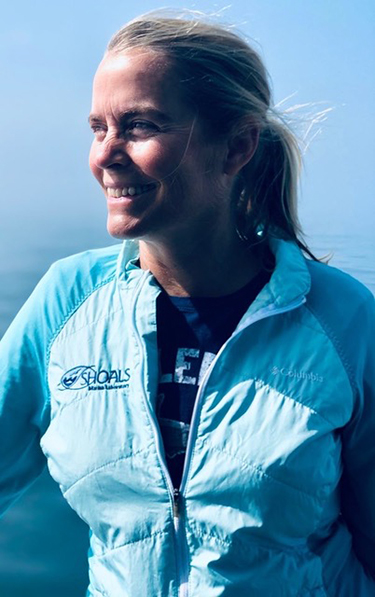 It’s a place of sky, sea, and granite-island edges where seabirds wheel and feed their young. But sometimes that food is the wrong kind.

At a well-established tern colony on Appledore Island, six miles off the New Hampshire and Maine coasts in the Gulf of Maine, Jennifer Seavey, ’97, and other biologists are concerned that adult birds are feeding chicks food that is hard to digest.

Appledore hosts the largest tern colony in the 36,000-square-mile Gulf of Maine as the result of a restoration project begun in 1997, but several subspecies of terns—including the roseate and the least—remain endangered or threatened.

The wrong food isn’t helping. In recent years, adult terns are increasingly feeding chicks butterfish, thin, saucer-shaped fish too wide for young beaks; they spit them up, and miss a meal. Butterfish are associated with warming waters—and in big butterfish years, the survival rate of young terns is worse.

(In this 2013 video from Maine’s Project Puffin and Hog Island Audubon Camp, a young puffin chick tries and fails to eat a butterfish brought by a parent.)

“Why do we care about the terns? They are excellent indicators of the fisheries’ health,” Seavey explains in a video at her lab. “The birds are basically fisheries biologists—they are sampling the fishery and telling us how healthy it is.” For instance, although butterfish are doing well, three key fish in the area—herring, hake, and sand-lance—are threatened. Those are important food sources for terns and other seabirds; herring are also the number-one bait used by the lobster industry that brings in $1 billion to Maine alone, according to a 2016 study by Colby College and Maine Lobster Dealers’ Association.

As executive director of Shoals Marine Lab here on the 95-acre island, Seavey notes that the Gulf of Maine is warming faster than 99% of the world’s oceans. “It’s upsetting, but it’s also an opportunity for research and addressing important challenges,” says Seavey, who has overseen the undergraduate-focused marine lab since 2014, as a faculty member at Cornell University and the University of New Hampshire. She arrived from Florida, where she was assistant director of Seahorse Key Marine Laboratory (now called the Nature Coast Biological Center), an hour from Gainesville.

These days, Seavey, who holds a master’s degree in wildlife science from the UW, researches the tern colony, but her lab also hosts programs for undergrads and the community in a wide range of topics: sustainable engineering, ornithology, and marine science. There’s a Washington connection, too: The lab shares many students and researchers with UW Friday Harbor Laboratories.

“Maybe because they look at equivalent temporal zones (northern, cold waters) but different oceans, I’d say Friday Harbor is probably the most common lab that people travel to and from at Shoals,” she says.

Seavey’s own research program is influenced by her graduate work in the UW School of Environmental and Forest Sciences and by her time as a research assistant for Professor Julia Parrish, a seabird ecologist.

“Dr. Parrish’s important work on seabirds as indicators for long-term ocean health influenced me greatly; it’s one reason I’m so interested in terns,” Seavey says. “They are important indicators of what is happening here and in oceans worldwide.”