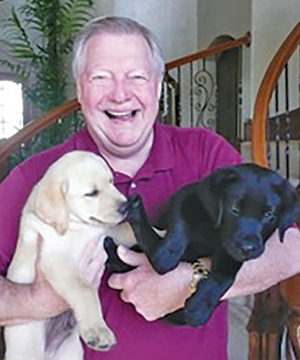 On “graduation day,” a dozen service dogs – mostly Labrador Retrievers – stand with their trainers while eager young men and women file into the gymnasium-sized room. The bright-eyed, tail-wagging canines are excited to meet their new owners. Watching from the sidelines is Bill Perkins, ’70, who feels gratified to know that he has helped create a program that enables American servicemen and women to find peace in their lives.

The program is Patriot Paws, a Texas-based nonprofit organization that employs people in prisons to train service dogs for veterans with physical disabilities and those trying to cope with post-traumatic stress disorder.

Since its inception in 2005, Perkins was Patriot Paws’ board chairman. Over the years, he has secured more than $3 million in grants for the group. In 2019, he stepped down from the position but continues to sit on the board.

“It’s gratifying to see when a service dog is given to a disabled veteran, and to know a partnership is occurring that will enable that person to have a better life,” he says. “Well-trained dogs can immensely help vets return to living an almost normal existence.”

Interestingly, Labrador retrievers make the best service dogs, Perkins says: “Labs are automatic retrievers, which is helpful for people in a wheelchair who have trouble picking things up. German shepherds are also good service dogs because they’re really smart, but when someone gets on an elevator with a big shepherd, everyone else in the elevator tends to back away. But everyone loves Labs and wants to pet them. They’re better when it comes to interaction with people.”

Preparing a service dog is arduous. It takes about two years of constant lessons to train a dog, and out of every 100 potential pooches, about 80 percent don’t make it through the program. But for those that do, the rewards are great for those on both sides of the leash.

As a lover of dogs (and a few cats) since he was a young pup himself, Perkins met dog trainer Lori Stevens when Max, his feisty German shepherd, needed a few classes at obedience school. Stevens and Perkins talked of their deep respect for military-service personnel and her wish to begin a program to provide dogs for veterans. Perkins, who had retired after spending 45 years in clinical research, volunteered his time and knowledge to help get Patriot Paws out of the kennel.

“I have a 100 percent high regard for those who served our country, and it was clear disabled veterans needed help. Plus, the program was a good way to keep myself busy,” says Perkins, whose resume includes stints as an executive and a clinical researcher at several major pharmaceutical and biotech companies.

After graduating from the University of Wisconsin-Eau Claire with a double major in music and biology in 1961, Perkins earned a Ph.D. in anatomy at UW. He was a postdoctoral fellow and a faculty member in pathology at Harvard Medical School from 1970-72 before joining the private sector.

Though he pursued a career in clinical oncology research, his love of music never waned. While at Harvard, he played trombone in the Wellesley Symphony and joined the Bellevue Symphony Orchestra while studying at UW. And today, at 82 years old, he’s still taking music lessons and playing in a number of community orchestras in Texas.

Between his music and work with Patriot Paws, he spends plenty of quality time with Cooper, his German shepherd. “He’s one of the family and runs the house,” he says with a laugh. “Dogs love you. You don’t have to worry about them not caring about you. They love you unconditionally.”

Benjamin Gleisser is a frequent contributor to University of Washington Magazine.