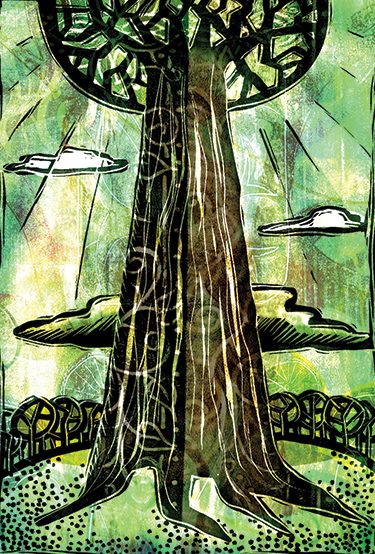 When it comes to trees, bigger is better. Big trees generate more seeds, provide more habitat for animals, and help forests resist disturbances. Big trees also occur in unique patterns and store more carbon compared to small trees. Big trees three or more feet in diameter accounted for nearly half the biomass measured at a Yosemite National Park site, yet represented only 1 percent of the trees growing there.

Professor James Lutz, UW research scientist in environmental and forest sciences, is the lead author of the largest quantitative study yet on the importance of big trees in temperate forests.

Lutz and his colleagues, along with help from students and citizen volunteers, are studying the new 63-acre study site in the western part of Yosemite National Park. A study in 2009 that involved Lutz found that the density of large-diameter trees in Yosemite declined nearly 25 percent between the 1930s and the 1990s.

“There are less large trees than there used to be,” says Lutz. “And tree mortality rates for trees bigger than 18 inches are higher than in previous decades.”

Scientists don’t know precisely how forests are changing, but because they will return every year to Yosemite they should gain valuable knowledge about why trees are dying and how the forest works.