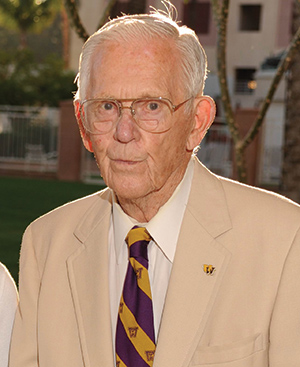 William R. Lewis, ’42, longtime editor and co-publisher of the Lynden Tribune and founder of the popular Chow Down to Washington event that is held every winter in Palm Desert, Calif., died June 23. He was 90.

The second child of Sol Lewis—publisher of the Lynden newspaper and his wife, Aimee—he served as advertising director for The Daily and played clarinet in the Husky Marching Band before earning his journalism degree with honors.

Lewis (and his brother Julian) became co-publishers of the Tribune after he married fellow UW undergraduate Margaret Alexander, ’44, and served in the Navy during World War II. In 1984, Lewis was honored with the Distinguished Service and First Citizen Award by the Whatcom County Council, which described him as “the heart and soul of journalistic endeavor in Whatcom County.”