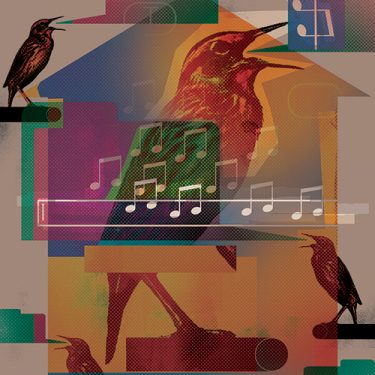 Brain cells that multiply to help birds sing their best during breeding season are known to die back naturally later in the year. For the first time, researchers have described the series of events that cue new neuron growth each spring, and it all appears to start with a signal from the expiring cells the previous fall that primes the brain to start producing stem cells.

If scientists can further tap into the process and understand how those signals work, it might lead to ways to exploit these signals and encourage replacement of cells in human brains that have lost neurons naturally because of aging, severe depression or Alzheimer’s disease, says Tracy Larson, UW doctoral student in biology and lead author of a paper in the Journal of Neuroscience on brain-cell birth that follows natural brain cell death.

Neuroscientists have long known that new neurons are generated in the adult brains of many animals, but the birth of new neurons—or neurogenesis—appears to be limited in mammals and humans, especially where new neurons are generated after there has been a blow to the head, stroke or some other physical loss of brain cells, Larson says. That process, referred to as “regenerative” neurogenesis, has been studied in mammals since the 1990s. This is the first published study to examine the brain’s ability to replace cells that have been lost naturally, Larson says.