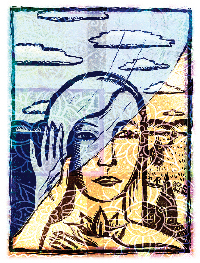 Depression is the No. 1 mental health problem in the United States, and its treatment often includes expensive drugs and long-term counseling.

Taking a page from Alcoholics Anonymous and similar groups, UW researchers successfully tested a brief, low-cost “intervention” to deal with depression instead.

Students with mild depression who received the treatment reported a 20 percent reduction in the severity of their symptoms one month later, compared with an 8 percent drop for the group that was not treated.

“At any given time, up to 35 percent of college students have depressed moods,” says Irene Markman Geisner, a Ph.D. candidate in psychology at the UW. “They are not clinically depressed, per se, but their mood clouds their academic and social lives and puts them at much greater risk for future clinical depression.”

After initial screening, Geisner’s team divided up 177 students into two groups. One set got a personalized feedback letter and a brochure. The letter told the students that the concerns they reported were consistent with depression and that this is a common experience for college students. It also said that there were many things the students could do to reduce depression.

The brochure, prepared for the study, listed six types of strategies students could use—social support, pleasant activities, exercise, self-help literature, meditation and spirituality, and medication—to help relieve their depression. The brochure also gave the students examples of problem solving and how to change their thought processes. Finally, it provided a list of on- and off-campus treatment resources.

The other group got a form letter with campus phone numbers and no brochure.

Researchers were pleased with the success of the personalized intervention but say more study is needed.

“The beauty of this study is that these people were not seeking help when they were sitting in a classroom, but help was brought to them,” says Mary Larimer, a study co-author and UW professor of psychiatry and behavior sciences. “People who received this brief intervention felt less hopeless and depressed, both physically and emotionally. Depression is a very costly problem and we should not wait for people to develop a more serious form of it before treatment is available.”

The study results appeared in the June issue of the Journal of Consulting and Clinical Psychology.