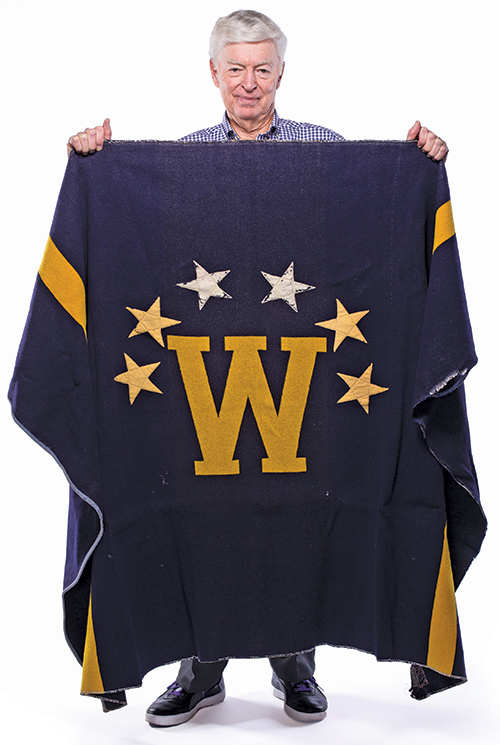 I cry tears of joy every year.

UW Commencement is considered to be one of the largest and most prominent ceremonies in the country. We have consulted on ceremonies as far away as Australia. In 2015, 5,712 students walked in front of a crowd of around 40,000.

We were Husky football fanatics.

Three of my fraternity brothers and I spontaneously road-tripped overnight to attend a UW-USC game in Los Angeles. We took turns driving a ’56 Chevy all the way on two-lane I-5. And we won 34-0!

Being a Husky is a way of life.

Athletics are a rallying point for the entire university. I’ve been the founding curator since the Husky Fever Hall of Fame opened in 2002. There are 500 pieces of memorabilia celebrating 21 sports plus 200 Husky Hall of Fame inductees.

The best artifacts are often surprises.

There is a 100-year-old track uniform; 1920s letterman sweaters with players’ names stitched into the collars; a 1948 watch presented to NCAA basketball participants. Sometimes people think the history is just about trophies. It’s more than that. It’s the people.

I’ve always been a sports guy.

I’m a Seattle native and, as a kid, I rode my bike five miles and paid $1 to see the Seattle Rainiers play baseball. Back then, it was all about the Rainiers, the hydroplanes and the Huskies. The first time I went to Husky Stadium, I sat two rows from the top of the upper deck. You felt like you were in the middle of the sky.

When I attended during the late ’50s and early ’60s, Hec Edmundson Pavilion still had a dirt floor for track athletes to practice. It was originally built in 1927, and they made space for the Hall of Fame during the 1999 remodel. It fits perfectly into the character and history of the building.

In the past, trophies and souvenirs were often smaller, but there was more art. We have old programs where you can tell somebody drew everything by hand. Those personal touches are so great!

My son helped design the iconic 1990 homecoming “Dawgfather” football poster displayed in the museum. My wife is pictured as part of the 1962 UW cheerleading squad alongside a set of paper pom-poms. I went to the games for her and the football. And there weren’t many things better than football!

If something looks worn, all the better!

We don’t restore items. I wanted to include quarterback Marques Tuiasosopo’s jersey after the Huskies won the 2001 Rose Bowl. His mother said she’d take it to the cleaners first. I asked her not to. It’s more interesting all marked up.

I’m going to throw this away.

Do you want it? It happens four or five times a year that someone calls, wanting to donate their family’s heirlooms. It’s a really special interaction. Sometimes multiple generations visit the exhibits to see their loved one’s legacy.

Visitors tend to be

… reverent and speak quietly. The Hall of Fame inspires people—even our very own student-athletes. I recall when a women’s volleyball player told me that she came in to the museum years ago and thought, “If I’m going to get in here, I need to put it into high gear.” Her team ended up winning a national championship.

When I was living in Portland,

… we used to stop at a Chehalis restaurant and buy cinnamon rolls to deliver to Don and Carol James on game days. It’s wonderful being part of a community that supports the university.