Character: Elise Ray, an Olympian who got off the mat

I competed in the Summer Olympics …

I kept landing on my butt …

and my back when I was warming up for vault, my very first event. I didn’t know what was going on. I thought I was just nervous. So I just ran faster and missed it again.

It was the most defeating moment …

of my entire career. I had really high hopes to medal. When you fall on your first event, you know it’s over. It was really hard to finish the competition.

Turns out, the vault was set too low.

We got to redo the event at the end of the competition. I made the vault like always but to redo an event, it’s not the same. It was utter disappointment because we finished fourth as a team and didn’t medal.

After the Olympics, I took a break.

Then I was recruited by the University of Michigan. I went there very sour toward gymnastics and I didn’t know if I wanted to do it anymore. I showed up very sad, very beaten down.

I learned to love gymnastics again …

at Michigan because collegiate gymnastics is so team-oriented. Being there also helped me land a job with Cirque du Soleil as a trapeze artist, where I performed in “O” at the Bellagio in Las Vegas and “Love,” the Beatles-themed show at The Mirage.

You’re so unaware of the audience

in gymnastics. But in Cirque you feed off that. You’re making eye contact with audience members, you’re feeding off their energy. It’s interactive, and so much fun.

You could mess up …

as long as you kept the authenticity of the show and performance. The audience actually loved it. In a handful of shows, I missed and landed in the water and as long as I swam to the side and stayed in character, it was OK.

Ten years after Sydney, we were …

awarded a bronze medal because it was discovered that the Chinese cheated by competing with an underage girl. It’s very strange to receive a medal 10 years later—you don’t get to stand on the podium with the flag and your teammates.

Every direction my life has taken …

stemmed from this heartbreaking experience. Then I look back and I think I wouldn’t have wanted it any other way. That’s a really important life lesson.

As a UW assistant coach,

I love the opportunity to work with 18- to 22-year-olds. That’s when they do so much growing up. I can relate to them. Plus, they make me laugh on a daily basis.

UW isn’t a gymnastics power. Yet.

But we are working to join the likes of Stanford and Florida. We recruit the same gymnasts as the top schools.

I want every gymnast to be completely focused for a minute and a half. When you see a wobble or a fall, the gymnast has lost that mental focus. I ask our gymnasts to think about three words to motivate them and exemplify how they want to look and feel. It could be “I am confident” or “I am focused.”

Our gymnasts better pay attention to me.

That’s why I tell them: Listen up, I’m the one with the Olympic medal. 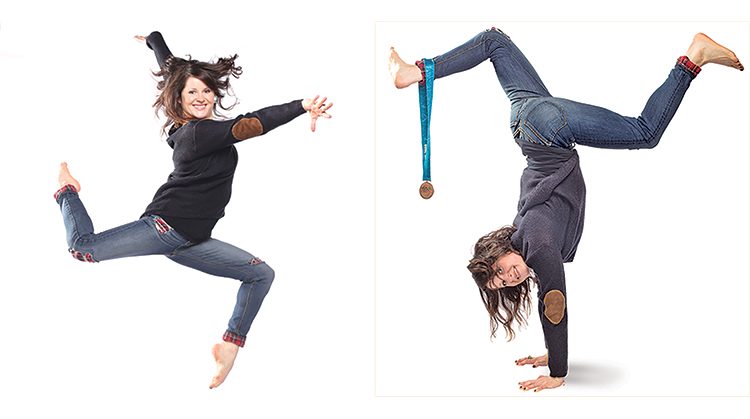