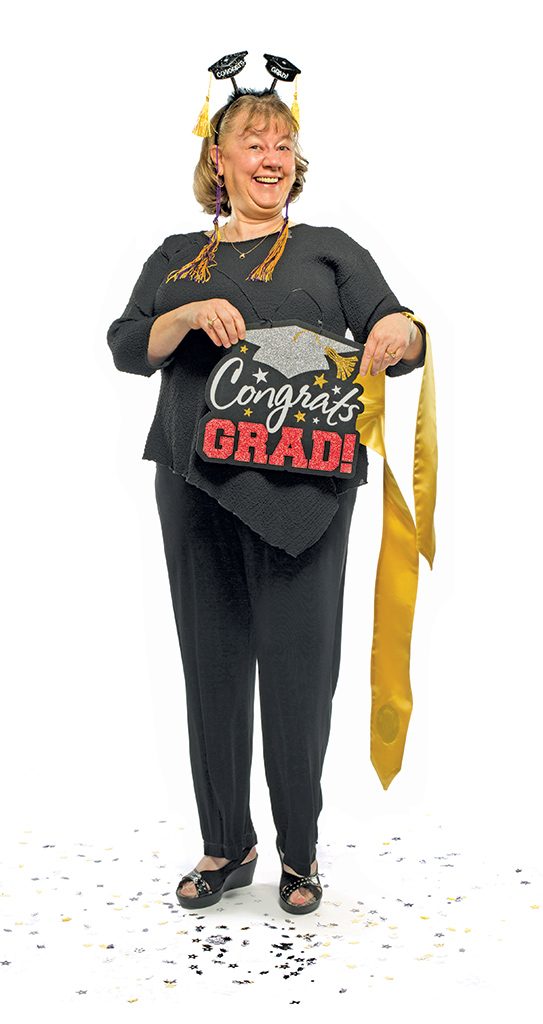 I cry tears of joy every year. UW Commencement is considered to be one of the largest and most prominent ceremonies in the country. We have consulted on ceremonies as far away as Australia. In 2015, 5,712 students walked in front of a crowd of around 40,000.

It’s only rained twice since I began producing UW Commencement in 2000. We put ponchos under all the students’ seats, but the caps still droop at the corners when you’re in the rain too long!

My mom organized my kindergarten graduation. I wore a little blue cap and gown and it was a whole production, including a drill team performance. It was magical growing up with her.

It’s always a push to the finish line. When we start, it’s just three of us sitting in the office planning. We add as Commencement nears until the actual day when there are around 350 people working the ceremony plus 125 faculty marshals.

The staff sometimes call it the Office of Sara-monies (Ceremonies). We have a little barometer on the wall that gauges how things are going. Sometimes it’s turned to the Office of Silly-monies and, as the big day nears, it becomes the Office of Serious-monies.

I realized how much I love my job when I stayed up all night watching Kate and William’s royal wedding. At one point, I actually paused the tape to intensely study the seating chart. I realized that I’m in the right business. I’m clearly obsessed!

My mother asks how my love of event planning started. At seven years old, she had me writing press releases for my Girl Scout troop and then submitting them to the local newspaper. You do what your mother tells you! Now, here I am.

We call him the Voice of God. We cue the top of Commencement with the boom, boom, boom! of the tympani drums and then the announcer says in his wonderful, bass voice, “Ladies and gentlemen, welcome!” Every head turns to the end of the stadium where the graduates enter. Husky pride comes at you in waves and you feel the love wash over you. I cry every year when that happens.

One of the most amazing things that ever happened wasn’t planned. During the welcome announcement, a formation of fighter jets flew over Husky Stadium, perfectly on cue. Everyone asked, “How did you do that! Nice job!” I didn’t do it, but it was awesome!

My first job was at Dawnbreaker Studio, owned by Seals and Crofts. The Jackson Five recorded “Shake Your Body (Down to the Ground)” and I could hear it from my desk. It was an amazing start to a career! I learned a lot about making things happen.

I can probably sing Pomp and Circumstance from beginning to end. When we start working on the Commencement soundtrack, everyone in the office usually ends up dancing. We start doing “Walk Like an Egyptian” across the room—and then the students will walk this way, then that way!

There is always a “Question of the Year.” One year it was that Commencement wouldn’t be at Husky Stadium. This year? That tickets are limited (they aren’t). It’s funny because I don’t know how the rumors start, but everyone ends up asking the same question.

I’m not as cool as a cucumber on Commencement Day. It’s humorous to watch me because I pace, moving the whole time, even when I’m confined to the control room.

I say it’s the day when academics take the field. On that day, no matter who you are, you are the most important person at the University.