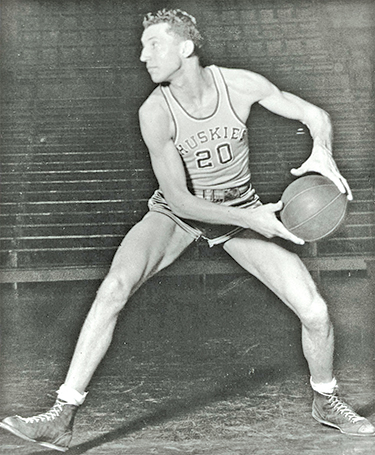 The chief of staff at a Filipino hospital, who used to play for the Boston Celtics, told the wounded Charles Sheaffer that the best therapy for him was to return to the basketball court when he got home. Sheaffer ended up starting for the Huskies that year. (Photo courtesy of Chuck Sheaffer)

When Charles Sheaffer started college at the UW in 1941, he intended to play baseball. One day, he ran into UW baseball coach Tubby Graves, who recognized him from his high school hoops days and told him he should sign up for the basketball team as part of his required P.E. classes.

“That’s how I turned out for basketball,” Sheaffer recalls. That season, he was one of 60 players who turned out for the freshman team. He made the squad, played center for the Huskies his sophomore season in 1942-43 and helped them reach the NCAA playoffs.

Shortly afterward, Sheaffer was drafted into the U.S. Army in the summer of 1943 to serve in World War II. He was sent to the Philippines. Then he was shot.

“A group of Japanese soldiers would charge our positions, firing their rifles toward us,” he says. “I was between two machine guns and firing my rifle with tracer bullets to zero in on the flanks of the Japanese troops and targets. I lowered my rifle and the bullet hit me.”

The bullet went through his right shoulder and knocked him flat on his face into the foxhole. “I had no use of my right arm for some time after,” he recalls.

He was treated by a medic and then he was transported to a hospital on the island of Leyte. The hospital’s chief of staff once played for the Boston Celtics and told Sheaffer that the best therapy for him was to return to the basketball court when he got home. In 1945, he was sent to a hospital in Walla Walla, where they had him shoot basketballs as part of his recovery. Sheaffer also was awarded a Purple Heart.

After the war ended, he returned to the UW.  When he did, Seattle Post-Intelligencer columnist Royal Brougham wrote: “You are going to be pulling hard for Charley Sheaffer to make the Husky basketball team this winter. Charley is the human beanpole who played some center for Hec Edmundson two seasons ago, and now is headed back to college after a tough hitch in the war.”

As Sheaffer recalls: “I asked coach Hec Edmundson if I could work out with the team. He said yes. By the time conference play started, I was starting. I played most of the games that season.”

He had perhaps his best game against Oregon that season, scoring a team-high 19 points. Although his right shoulder injury had prevented him from lifting his right hand to shoulder height, he went up for an offensive rebound and was able to use both hands to dunk the ball. “I was at the top of the mountain,” he recalls.

Sheaffer was elected captain of the team during his senior season in 1946-47. He gained much attention for playing hoops after his World War II wound and was promoted in one story as “King of the Campus.”

After graduating with a degree in engineering, Sheaffer went to work for the Department of Agriculture and later for such companies as Pictsweet Foods. He spent 25 years working in the frozen foods industry and worked for an international engineering company called PADEC (later FOODPRO) in San Jose.

Sheaffer is now  97 and still in good health. So good that he attended the Apple Cup last November even though he lives in Idaho now. His son, Chuck, who also went to the UW, and daughter Jane were with him at the game. The Huskies still mean an awful lot to him.

“I had respected Hec Edmundson and his team for many years,” he says. “It was a real pleasure to be a part of that.”