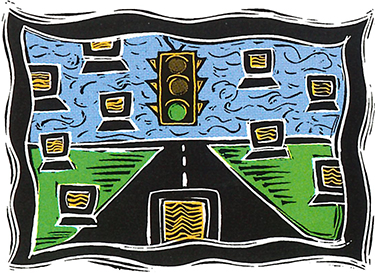 While there’s been a lot of talk about the “Information Highway” coming to your home, the instant delivery of video can’t happen until engineers clear up traffic bottlenecks.

A standard frame of video contains as much as 8 million bits of information. Add full motion and you may get 240 million-bits-per-second requirements. Those loads would jam conventional communication lines and overload most microcomputers. Enter UW Electrical Engineering Pro­fessor Yongmin Kim, whose computer system compresses and decompresses full-motion video signals at 30 frames a second.

The new system, called MediaStation 5000, is essentially a parallel supercomputer on a board that can turn low-end microcomput­ers into monster machines capable of receiving, watching, storing and editing video with CD-quality audio in real time, over any distance, at five times the resolution of the best conventional TV available today.

At the heart of the new system is a new, digital signal processor from Texas Instruments, which fits five processors and 4 million transistors on a half-inch square.

Announced in March, Kim expects the new system will be available in technical, commercial and consumer products later this year.