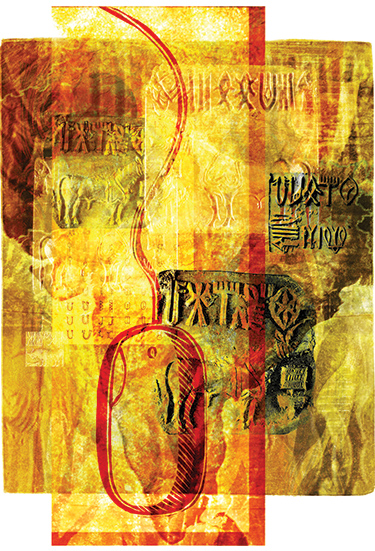 An ancient mystery, a modern-day academic debate, and state-of-the-art computer science—these are the elements of recent research by Rajesh Rao, UW associate professor of computer science and engineering.

The ancient mystery involves inscriptions produced by the Indus valley civilization, which flourished more than 4,000 years ago along the border of present-day Pakistan and India. The inscriptions, on small tablets and objects such as stamp seals and amulets, were first discovered more than a century ago, but no one has ever deciphered them. In fact, scholars have disagreed about whether the script represents a spoken language, or merely religious or political pictograms.

Rao, an expert in an area of computer science known as machine learning, primarily works on questions related to robotics and the brain-computer interface. He began investigating the Indus script while on sabbatical in his native India, collaborating with researchers from Mumbai and Chennai.

The team used a machine-learning approach to compare the patterns in the Indus script with those of known languages, including English and ancient Sanskrit, and also with nonlinguistic systems such as DNA sequences. Nonlinguistic systems tend to be either totally random or rigidly ordered. Language involves a combination of structure and flexibility—sentences can be put together in different ways, but once you’ve begun a sentence, there are only a limited number of ways to finish it.

The patterns in the Indus script were very different from those of the nonlinguistic systems, Rao and his team reported in the journal Science in April. Instead, the script exhibited a structure/flexibility balance much like that of the known languages.

Next, Rao and his coauthors plan to see if they can pick out patterns of grammar and syntax in the script. This could enable perhaps someday aid in finally deciphering the script.