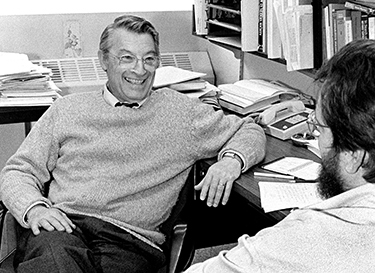 In the days following the death of Daniel Lev on July 29, his obituary appeared prominently in the newspapers of both Seattle and Indonesia, where he was known to many as “Bapak (Father) Dan.” A professor of political science at the UW and a renowned scholar of Indonesia, Lev, who died of lung cancer at the age of 72, was well loved and influential on both sides of the Pacific. He not only educated his American students, but also inspired those who lived under a corrupt legal system in Indonesia during the brutal rule of the right-wing Suharto regime.

Born in Youngstown, Ohio, in 1933, Lev grew up surrounded by steel mills and was a Golden Gloves boxer as a teen. After graduating from Ohio’s Miami University in 1955, he began his doctoral studies at Cornell University, where he became fascinated by Indonesia’s rapidly changing political climate. Eventually, he would write a groundbreaking study, The Transition to Guided Democracy: Indonesian Politics 1957–1959, which is regarded as a classic on this period in the country’s history.

In 1959, Lev and his wife, Arlene, made their first trip to Indonesia, where they would remain for three years. Lev developed far deeper emotional ties with Indonesia than most academics, says Carmel Budiardjo, co-founder and current head of TAPOL, the Indonesian Human Rights Campaign. After returning to the States, Lev taught at the University of California, Berkeley, for five years before moving to the UW, where he remained until his retirement in 1999. In the classroom, as in Indonesia, Lev evinced a belief that the value of ideas lay largely in their potential for real-world application. “What made Professor Lev stand out from his colleagues was his willingness to spend class time discussing current events regardless of how much it diverted from his set agenda,” Gregory Dziekonski, ’85, ’89, wrote in a 1999 Columns tribute to Lev.

In addition to writing numerous books, Lev amassed 17 boxes of notes and research material, which he donated to the Jakarta-based Center for the Study of Policy and Law (PSHK) for the next generation of reformers. Such was the importance of Lev’s work that Bivitri Susanti of the PSHK says the non-governmental organization will name its library after him.

Since Lev’s death, many former students and colleagues have traveled from the South Pacifi c to pay their final respects. Budiardjo points to a talk Lev delivered in October 2005. “Despite the temptation, amid numerous failed reform efforts, to lapse into a state of despair,” Budiardjo recalls, “he urged his audience not to dismiss the Indonesian situation as hopeless.”

Lev is survived by his wife; his son, Louis Lev; his daughter, Claire Murata; and three grandchildren.