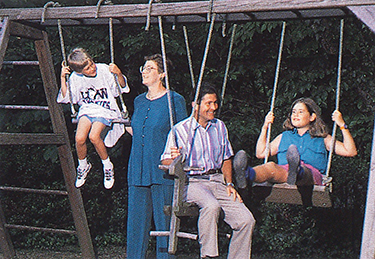 Dr. Richard McCormick and his family in the backyard of his former home in North Carolina. Photo by Dan Sears.

It is typical of Dr. Richard L. McCormick, the new UW president, that when we asked him and his family to pose for some pictures to run in Columns, he literally went the extra mile.

McCormick, his wife, Suzanne Lebsock, and their two children, Betsy and Mikey, had just driven back to their Chapel Hill, N.C., home after a week’s vacation. They were unloading their car when our photographer showed up. Rather than turn him away, the family graciously cooperated on the photo shoot. McCormick even donned a Husky T-shirt before taking a jog for the camera.

After talking to many friends and colleagues of Richard McCormick for this issue’s cover story, it comes as no surprise to this editor that he made that extra effort. Co-workers shared several accounts of McCormick’s late-night meetings; weekend work sessions; and his flood of faxes and phone calls as he tackled problems at Rutgers University and the University of North Carolina-Chapel Hill.

“He just works all the time,” says Paul Leath, who was the provost at Rutgers when McCormick was dean of arts and sciences. “He was constantly coming up with new proposals. It probably made the other deans work harder.” Now the University of Washington is the recipient of his dynamic style.

It is fitting that we celebrate the arrival of a new president in the same issue that celebrates the 100th anniversary of our move from downtown to our present campus. Our campus founders saw a great future for the UW, if they could convince the state Legislature to move it out of its cramped downtown quarters.

Their vision helped make the University of Washington, in our new President’s words, “one of the great public research universities on Earth.” There is no doubt that Richard McCormick will make every effort to preserve and enhance this legacy.