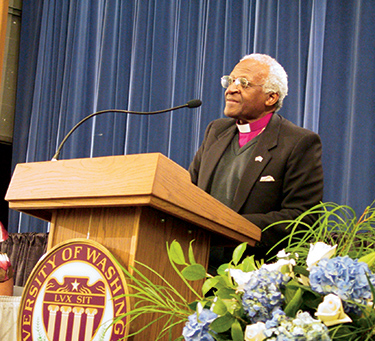 Archbishop Desmond Tutu, winner of the 1984 Nobel Peace Prize, visited the UW on May 7, and received a UW honorary degree.

Anglican Archbishop Desmond Tutu received an Honorary Doctor of Humane Letters degree from the University of Washington on May 7, the first time the UW has awarded an honorary degree since 1921.

Tutu, archbishop emeritus of Cape Town, South Africa, delivered an address on “Peace, Reconciliation and Leadership” during an academic convocation in Meany Hall.

He was a leader in the nonviolent struggle against apartheid in South Africa, receiving the Nobel Peace Prize in 1984. After South Africa’s first democratic election in 1994, President Nelson Mandela appointed Tutu chair of the Truth and Reconciliation Commission.

Tutu was born in 1931 in Klerksdorp, Transvaal. In 1954 he graduated from the University of South Africa and was ordained as an Episcopal priest in 1960. In 1975 he was appointed dean of St. Mary’s Cathedral in Johannesburg, the first black to hold that position. From 1976-78 he was bishop of Lesotho, and in 1978 became the first black general secretary of the South African Council of Churches. He became archbishop of Cape Town in 1986 and retired in 1996.

Tutu works worldwide to advance the values of peace, reconciliation and restorative justice through the Desmond Tutu Peace Foundation. The Tutu Peace Foundation of North America is headquartered in Seattle. Robert Taylor, dean of St. Mark’s Cathedral, is the foundation president; Constance Rice, ’70, ’74, is executive director.

The first UW honorary degree, Doctor of Laws, was conferred in 1885 by the territorial university to Orange Jacobs, who later became a local judge. Two years later, the UW conferred three doctor of divinity degrees to local religious ministers and in 1894 it granted an honorary doctor of philosophy degree to the editor of the Seattle Post-Intelligencer, Frederic James Grant. The last time the UW awarded an honorary degree was in 1921, when it gave one to French Marshal Ferdinand Foch, who led the Allied forces in World War I.

According to University Relations Associate Vice President Norman Arkans, it is not clear why the practice ceased after that date. Although the regents have been authorized in state statute to award honorary degrees, only recently has the University become interested in reviving the program.

This year, the Faculty Senate passed legislation that specified procedures for awarding such degrees, with the responsibility for recommending them vested in the Faculty Council on University Relations. This council recently recommended that Tutu receive an honorary degree. The council also recommended that former U.S. Secretary of State Madeleine Albright receive an Honorary Doctorate of Laws during the June commencement ceremonies.