Diagnostics could be done at a distance, UW bioengineer says 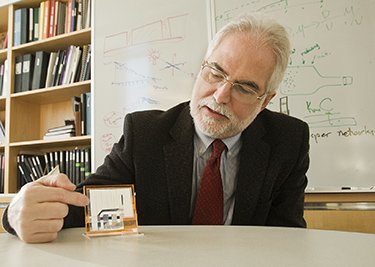 Almost every adult has had the experience of feeling terrible, leaving work and driving to a physician for tests that confirm: “Yes, it’s the flu.” Sometime in the next five years that scenario may change profoundly because of something called “paper-based diagnostics.”

Paul Yager, chair of the UW Bioengineering Department, is principal investigator on two grants totaling up to $26 million that aim to move diagnostic medicine away from standard antibody testing to paper. The technique may be especially beneficial for people in developing countries, where diseases such as malaria and dengue are widespread and where lab access is limited for many people.Yager explained that a simple kind of diagnostic tool kit will allow a person to take their own urine, spit or sputum sample, drop the sample in a vial and push a button that makes the vial shake. After a few minutes a pattern of dots or lines will appear on a piece of paper. The person will capture a picture of the pattern on a cell phone and then email it to a physician or a lab. UW researchers are expanding the number of paper-based tests and working for results comparable to a fully equipped laboratories.