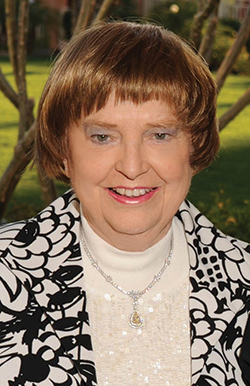 Diane Gamble, ’59, whose passion for business was matched by her devotion to the University of Washington, died June 14. She was 73.

Gamble, who earned a bachelor’s degree in business administration, was one of the most dedicated philanthropists and volunteers the University of Washington Alumni Association has ever had.

Along with her husband, Lex, ’59, Gamble was honored in 2010 with the UWAA Distinguished Service Award. For the past 37 years, the Gambles have opened their home in Chappaqua, N.Y., to host UWAA Salmon Barbecues.

Katherine Koberg, ’75, editor in chief of Seattle Metropolitan magazine, was a big fan of the salmon barbecues. “When I was fresh out of UW and living hand to mouth on the Upper West Side of Manhattan in the late 1970s, there was no greater treat than to attend the annual alumni salmon bake at the Gambles’ home,” she said.

As a businesswoman, Gamble served as president and CEO of Link Resources, Inc., a firm specializing in emerging communications technologies. After that, she was an executive of several research departments in the Walt Disney Company and ABC.