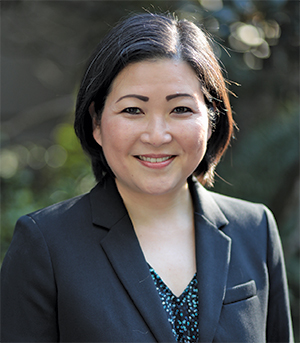 Colleen Fukui-Sketchley’s commitment to serving the UW Alumni Association, the University of Washington and higher education in the state of Washington has been nothing short of amazing. Over the past decade, she has played a major role in making some of the alumni association’s most important initiatives a reality – actions that have benefited hundreds of thousands of residents of the Evergreen State.

As president of the UWAA Board of Trustees during the 2010-2011 academic year, Fukui-Sketchley, ’94, oversaw the creation of UW Impact, the alumni association’s legislative advocacy program and played a key role in hiring its first full-time director. More than that, Fukui-Sketchley served as the face of the UWAA, holding a press conference that announced UW Impact and explaining what a vital role it would play in supporting the University and higher education throughout in the state. She served six years on the UWAA Board of Trustees.

Her role may have changed but her involvement hasn’t lessened. She has maintained active volunteer engagement in numerous UWAA and UW programs and services, including being on the Board of Trustees for the UW Foundation and committee member of the UW Regents Diversity, Equity and Inclusion Advisory Committee. Says Paul Rucker, Executive Director of the UW Alumni Association: “Colleen is a remarkable advocate and ambassador for the UW and higher education in the state of Washington.”

Her work in the legislative advocacy arena is particularly noteworthy. “Many alums are accustomed to the traditional asks of their time, knowledge or time. Asking an alum to reach out to his or her lawmakers to support the UW and public higher education is often a new request,” says Courtney Acitelli, ’08, UW Impact’s program director. “Colleen embraced the importance of legislative advocacy and understood from the onset that alumni have a critical role in driving lasting change.”

Fukui-Sketchley is a second-generation Husky and Seattle native who spent 21 years leading diversity and inclusion programs at Nordstrom. Currently, she serves as Director of Engagement, Inclusion and Diversity at HashiCorp and continues to make an impact on the campus and the community through her volunteer service.

Simply put, her contributions to the UW, UWAA and higher education in the state of Washington are invaluable. “She embodies the values and integrity of the UW and UWAA with special distinction,” Rucker says, “and it is the UWAA’s privilege to recognize her as the 2021 UWAA Distinguished Service Award recipient.”