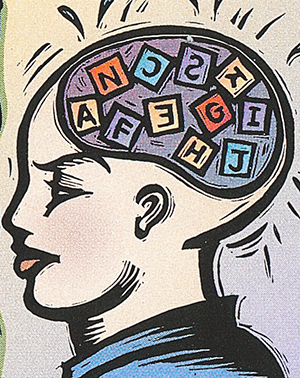 For the first time, a study has confirmed that there are chemical differences in the brain function of dyslexic and non-dyslexic children. UW researchers found that dyslexic children use nearly five times the brain area as normal children while performing a simple language task, the UW reported Oct. 6.

Dyslexia, a reading disorder, is the most common learning disability, affecting an estimated 5 to15 percent of children. The research also provides new evidence that dyslexia is a brain-based disorder.

UW researchers used a brain-imaging technique to track the metabolic brain activity of six dyslexic and seven non-dyslexic boys during oral language tasks. “The dyslexics were using 4.6 times as much area of the brain to do the same language task as the controls,” says UW Radiology Professor Todd Richards. “This means their brains were working a lot harder and using more energy than the normal children.”

“People often don’t see how hard it is for dyslexic children to do a task that others do so effortlessly,” adds Education Professor Virginia Berninger, who also led the project. “When a child has a brain-based disorder, it is treatable, although it may not be curable, just as diabetes is. Dyslexia is a lifelong condition, but dyslexics may learn to compensate for it later in life. We know dyslexia is a genetic and neurological disorder. It is not brain damage. Dyslexics often have enormous talents in other parts of their brain and shine in many fields.”