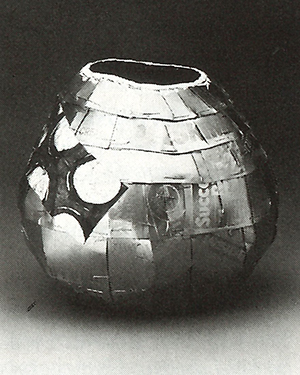 Ed Rossbach sees beauty where most of us wouldn’t even bother to look. Rossbach, a 1940 UW graduate and pioneer in the field of textile art, has created baskets and other works of art from materials such as cardboard food packages, plastic, vinyl tape, masking tape, polyethylene film tubing, and newspaper.

His work has not only earned him worldwide acclaim but redefined conventional notions about what materials are potentially precious. “He was the first to use plastic tubing in works of art, the first to use such throwaway materials as newspaper and cardboard,” says Rebecca A.T. Stevens, a consulting curator at the Textile Museum in Washington, D.C.

Rossbach has been invited to participate in every comprehensive exhibition of fiber art in the United States since World War II. The first retrospective of his work, “Ed Rossbach: Forty Years of Exploration and Innovation in Fiber Art,” is on exhibition at the Oakland Museum until July 7. The exhibit includes 93 pieces created over more than 40 years. Rossbach taught painting and weaving at the UW in the late 1940s and, by 1950, joined the art department at the University of California, Berkeley, where he became professor emeritus in 1979.