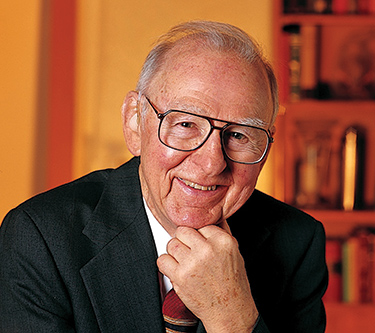 Edwin G. Krebs, a UW scientist who shared the 1992 Nobel Prize in physiology or medicine for discovering a biological switch in cells, died Dec. 21. He was 91.

Krebs, who was born in Lansing, Iowa, in 1918, shared the Nobel Prize with UW colleague Edmond Fischer for a discovery they made in the 1950s that attracted little attention at the time.

While working on another scientific problem, they made an unexpected finding — an enzyme that helps liberate energy in muscle cells (called glycogen phosphorylase) was activated by chemical reaction with phosphate, and de-activated by its removal. Adding and removing phosphate was like turning on and off a switch that controlled the enzyme’s activity.

Their discovery was monumental because it is known to govern the function of proteins for the relaxation and contraction of muscles, various aspects of cell metabolism, and the release and reception of hormone and nerve signals. The enzyme activity they identified also is linked to learning and memory, cell shape, motility and division, the transcription of genetic information and the manufacture of proteins.

Problems with this regulatory process are behind such disorders as cancer, diabetes, nerve disease and heart conditions. Pharmaceutical and biotech companies focus many of their efforts in developing new drugs on this phosphorylation process.

Krebs earned his undergraduate degree in chemistry from the University of Illinois and his medical degree from Washington University in St. Louis. He joined the new UW medical school in 1948.

In 1969, Krebs moved to the University of California Davis medical school as its chairman of biological chemistry. But he returned to the UW in 1977 as chair of the Department of Pharmacology. He was also an investigator for the Howard Hughes Medical Institute.

In the 1980s, Krebs received numerous awards for his research into the understanding of human biology in health and disease.

Remembrances may be made through gifts to the Edwin G. Krebs-Hilma Speight Professorship in Cell Signaling and Cancer Biology at the University of Washington. Checks can be made payable to the UW Foundation and sent to UW Medicine Advancement, 815 Mercer St. C-5, Box 358045, Seattle, WA 98109.