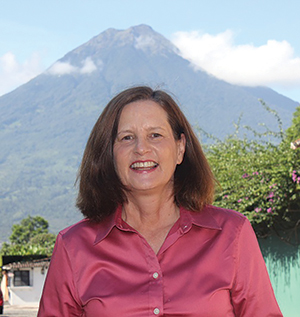 Elizabeth Bell has lived in Antigua, Guatemala, since she was 14.

It’s not every day that someone wins a gold medal for their historic preservation efforts in a country that’s not their native land. But that’s what Elizabeth Bell received from the National Council for the Protection of Antigua for more than 42 years of “tireless effort in preserving the city and promoting understanding of the heritage” of Antigua, Guatemala.

Palo Alto, California-raised Bell, who studied Latin American history and historiography (the study of historians) at the UW, has lived in that beautiful Colonial city since she was 14. “I’m married to the historic preservation of Antigua,” says Bell, ’81, author of seven books about Antigua and an operator of cultural tours throughout Guatemala since 1992 as owner of Antigua Tours. Bell’s adopted city, a UNESCO World Heritage treasure, was founded in the 16th century and boasts Latin America’s most spectacular Easter celebration. 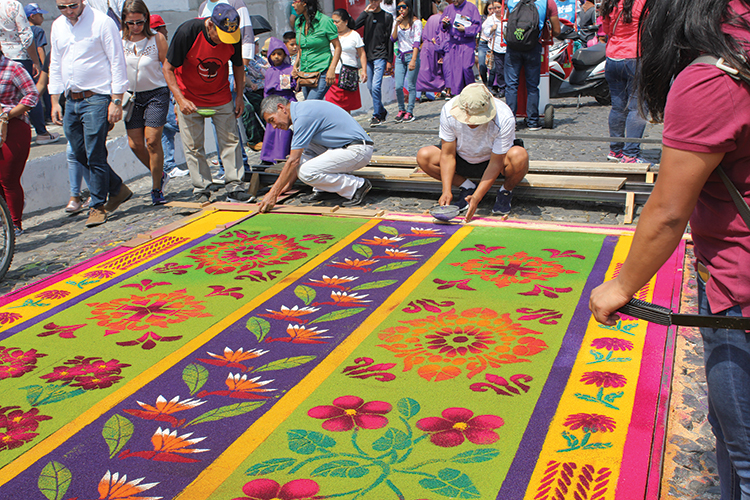 “Flower carpets” in ornate patterns, created by local volunteers from petals, leaves, fruit and dyed sawdust, decorate Antigua’s cobblestone streets during Holy Week, to be trampled by religious processions and then remade anew each day. Superbly photogenic, Guatemala’s original capital draws visitors worldwide to enjoy the vivid primary colors. The city is surrounded by volcanoes. A major eruption in 1773 left the city in ruins, forcing almost all of its citizens to move away.

Bell’s father worked for Sunset magazine in the Bay Area before he moved his family to Antigua in 1969 after falling in love with it on a trip to Central America. Her parents owned a B&B and textiles shop in Antigua, became experts in Mayan textiles and even worked on an exhibit of traditional Mayan textiles at San Diego’s Museum of Man. After graduating from the University of San Carlos in Guatemala City and graduate school at UW, she furthered her studies in Rome and Havana, Cuba. At Rome’s International Centre for the Conservation and Preservation of Cultural Property, she earned a certificate in Architectural Conservation.

But, unlike the U.S., Antigua lacked federal, state and city grants or tax credits for historic preservation. So, Bell and like-minded cohorts encouraged private owners and buyers to preserve their properties.

While the law to protect Antigua was passed in 1969 (coincidentally, the year the Bell family arrived in Antigua), “It was not popular at all. So, our small group implemented it.” They also pushed for the city’s UNESCO designation.

“Antigua for us is a feeling,” Bell explains. “It’s a magical place.”