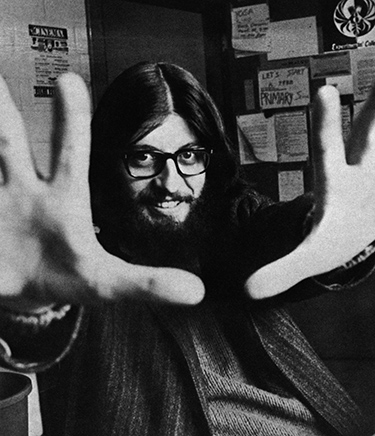 Experimental College Director Larry Bailey mugs for the camera in this 1969 Tyee photo.

It’s now a UW tradition, but when it was founded in 1968, it was anything but traditional. With courses like “The Universe, Poetry and Old Orange Peelings,” “Beginning Palmistry,” “Woman as ‘Nigger,’” “Revolution and Political Activism,” “Witchcraft” and “Drugs: Uses and Abuses,” the Experimental College (now the ASUW Experimental College) was a response to the “Establishment.”

“We felt there should be something around for people who just want to learn, without the pressure to achieve,” says Jim Kruger, ’69, ’71, who was part of a group of 12 students who founded the organization.

At the beginning, anyone could be a teacher. In the first catalogue, Kruger says, there was extra white space at the end of one sheet, so they made up a course in “Self-Awareness” and a fake professor to teach it. When the day of the class arrived, one of the college founders sat in the back and let the enrollees wait for the fictitious professor. “When the professor never showed up, our guy stood up in the back of the classroom and said, ‘Gee, if this is a course in self-awareness, why don’t we just start a conversation ourselves?’” Kruger says that not only was the course a success, but it set the tone for the future. “To this day, there are many offerings in ‘self-awareness’ in the Experimental College catalog,” he says.

But he agrees that “it was a time of silliness, and some of this stuff we did was viewed as silliness.” For example, one offering in the early ’70s was called “Dark Communications.” Its description read, “You will make friends. You will touch them, talk to them, play games with them, but you will never see them. They will like you for who you are, not for what you look like or for the clothes you wear. The class will be a dinner party like every other Friday evening for six weeks or more. The house will be pitch black. Not even the light from a cigarette will be allowed. You will not be able to mention your real last name, your age, weight, color of hair, etc. This will not be an orgy, although body contact is expected.”

Unconventional courses like this were offered at alternative colleges across the United States in the mid-’60s. In Seattle, there had been an off-campus group called the Free University, but it failed due to the cost of renting space in the “U” District. The founders of the Experimental College picked up the pieces from the Free University with a difference—they wedded themselves to the ASUW. “I was 30 years old at the time,” says Kruger. “I recognized the importance of the student political body to this.”

At first ASUW gave them some office space, then in 1971 the college was officially incorporated into the student organization. Despite the controversial content of some offerings, Kruger recalls that the UW administration left the group alone. “We were very intelligent about the UW. We went to the most conservative department on campus to get faculty to be our advisers—engineering,” he says.

Over the years the offerings changed with the times. Seminars in stock investing, computers and home buying crept into the catalog, while revolutionary politics faded. But today you can still find “Tarot Card Reading,” “The Art of Herbal Seduction” and “Foot Reflexology” along with offerings in cooking, languages, fitness, writing, art, yoga, business and martial arts.

While the college remains one of the largest of its kind in the nation, in the 1990s it had financial problems and actually closed in 1996-97 to reorganize. Today the ASUW Experimental College is back, stronger than ever, with nearly 200 classes serving about 4,000 people per quarter. About half the participants are UW students. It now has a computerized registration system, takes credit cards and has its own Web site.

As for Kruger, after graduation, he stayed in Seattle and was a legislative assistant and an ombudsman for King County. But when asked about his favorite Experimental College class, he had a confession to make. “I have never in my life taken a course at the Experimental College,” he revealed. “I’ve always been too busy.”