Teaming up to shelter the homeless, 20 Dawgs built a UW-themed tiny house

“We don’t all agree on every issue surrounding homelessness, but we found common ground in wanting to help others,” says foreman Don Dockter, ’72, whose front yard served as the construction site.

It’s routine to encounter construction all over Seattle, but a bite-sized house built above Shilshole Bay inspires passersby to stop and take a closer look. It resembles a storybook abode complete with a gabled roof and flouncy curtains adorning the single window. It also draws looks because of the color scheme—shades of purple—and the oversized “W” under the arch.

A passing driver rolled down his window. “Whose house?” he playfully inquires.

“The Dawg House!” they roar in approval.

During a single week in May, a group of more than 20 UW alumni built the tiny house as shelter for local homeless populations. Don Dockter, ’72, laid the groundwork. He was inspired after volunteering to “pound a few nails” as part of a friend’s tiny-house project, and envisioned the possibilities of a Dawg House version. The retired salesmen pitched the idea to “The Whizzies,” his close group of college friends who met as Haggett Hall roommates more than 50 years ago.

The response was overwhelming. More than 20 Whizzies donated the needed $2,500 in addition to committing blood, sweat and beers to make the tiny house a reality.

“We don’t all agree on every issue surrounding homelessness, but we found common ground in wanting to help others,” Dockter says. “It comes down to people being warm, dry, safe and not living second-to-second. People have to survive long enough in order to even have the chance to address whatever issues they’re facing.”

The tiny-house structures are no larger than 8-by-12-by-10 feet. The Whizzies based their version on existing models with utilitarian features such as a plywood bunk bed, built-in table and clothing rod. To give the house a sense of home, a few flourishes included a set of plate and cups along with curtains and placemats sewn by Dockter’s wife, Donna. 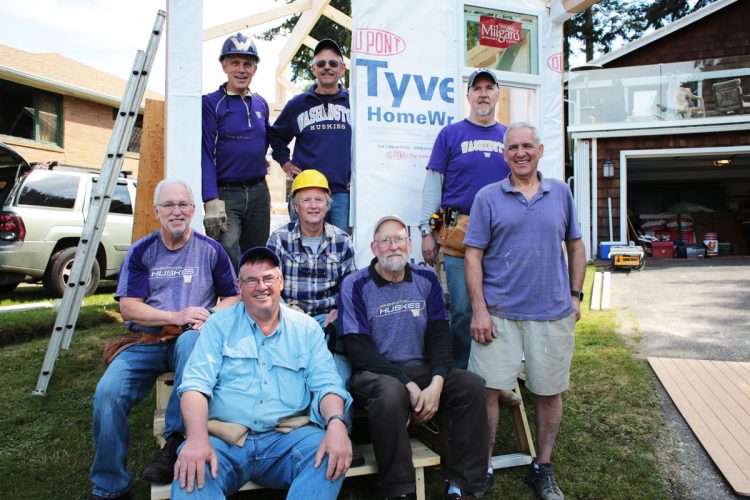 “When Don and I renewed our wedding vows, one of the things we included was to always remain hospitable to others,” says Donna Dockter. “I can’t imagine what it’s like to be homeless, but hopefully this will be a step toward someone else being able to find their place.”

The Dockters’ front yard served as the construction site and out-of-town Whizzies stayed at the main house, where they shared nightly, home-cooked meals. Other than the 8 a.m. start time, “it was almost like living in the dorm again!” Dockter laughs.

Karl Graf, ’72, was designated “Head Honcho.” He worked as a house builder during college before earning a degree in electrical engineering. Everyone brought tools from home and makeshift saw horses dotted the driveway while sawdust sprinkled the lawn. Construction progressed quickly with the basic structure completed, siding installed and roofing finished by the second day. There were often twice as many volunteers as expected and it became a multi-generational affair including children and grandchildren.

“There is the formal, book aspect to any education. But equally important—maybe more so—is the life learning. The UW created an environment that instilled in all of us a sense of responsibility to give back to our communities,” Graf says.

Whizzies traveled from as far as Spokane and Portland to participate. Everyone has witnessed homelessness in their respective communities. Some group members have personally known and been affected by loved ones struggling with housing instability.

“There is a wide spectrum of experiences that people brought to the project and that really reinforced the purpose,” Dockter says. “None of us come from very wealthy backgrounds, but we all benefited from going to the UW and ended up doing quite well in life. This is a way we can give back while representing the university.”

The Whizzies’ house was completed in about a week’s time and will be donated to a Seattle tiny-house village operated by the Low Income Housing Institute (LIHI). LIHI is an advocate organization and provider of homeless services to the Puget Sound region. It oversees and provides additional basics—such as electricity, common-area kitchens, restrooms and more—to the tiny-house villages.

“There is a general feeling that not enough is being done about homelessness, but we can do more than sit around gripe about it,” says Rick Firth, ’69, who graduated with a sociology degree. “Get out there and do something. Maybe it’ll make the difference for someone.”

There is already discussion for the Whizzies to build another tiny house and perhaps make it an annual tradition along with their yearly July 4th gathering and Christmas calendar.

The inaugural project was a tiny house with a big heart. Craig Popp, ’70, put his environmental design degree to good use and made a sign to hang at the thresh hold. Built by Washington Whizzes emblazoned with a rising sun welcomes visitors.

“We want the residents to know people do care about them,” Popp says. “That sign tells them the UW Whizzies built this house and we stand proud for all that provides. The sun is there for a reason. It shows there is always a brighter day ahead.”