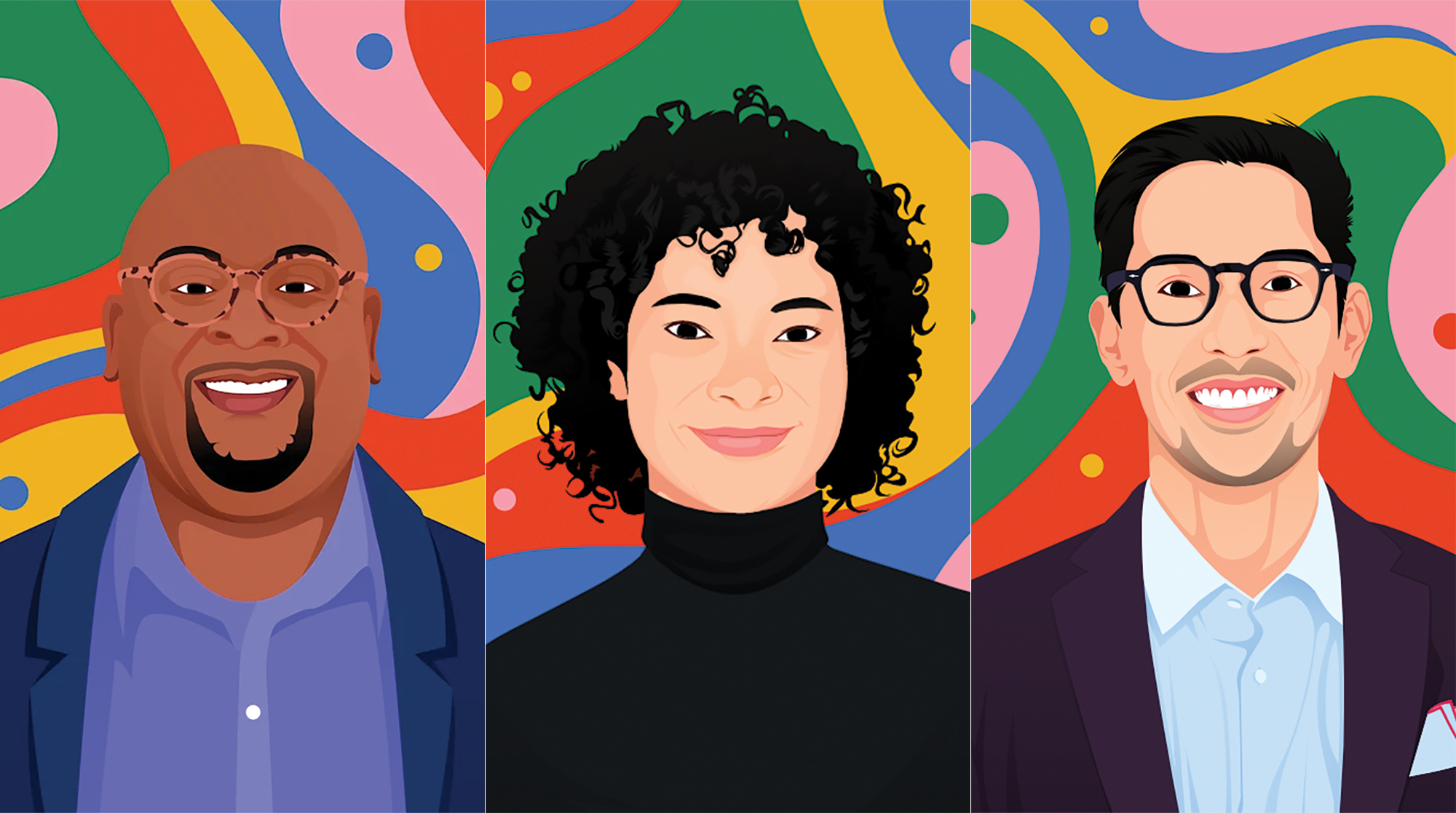 In early March 2020, Brian J. Carter, ’08, leaned forward in his office chair at 4Culture, King County’s cultural funding agency, to do some quick back-of-the-napkin math. The looming loss of revenue for the nation’s arts-and-culture industry was staggering: nearly half a billion dollars.

As 4Culture’s executive director, Carter knew the arts-and-culture sector would face devastating losses as one of the pandemic’s first victims. By the time the statewide stay-at-home order was issued in late March, Carter saw his initial estimates balloon. Theaters went dark, museums shuttered, and many artists had no foreseeable income. The agency had a monumental task ahead.

4Culture is a driving force in the region’s creative landscape—supporting everything from the Seattle Shakespeare Company to up-and-coming multimedia artists. King County residents encounter 4Culture’s influence when they step inside a museum, read poetry on a Metro bus poster or stroll past a colorful mural.

Historically, philanthropists who supported arts and culture often overlooked marginalized communities. 4Culture aims to reverse that trend. When Carter took on the executive director role in 2018, he renewed the agency’s mission—to fund, support and advocate for culture in King County—with racial equity at its core. “I want to position 4Culture as an innovative, experimental place,” says Carter. “To do that, we had to make a commitment to racial equity as a featured focus of the way we work and see ourselves.”

Behind the scenes, you’ll find him working with two other Husky alums—Joshua Heim, ’10, and Chieko Phillips, ’11—to make the cultural ecosystem more equitable, accessible and inclusive. One example is the grants they give to organizations in underserved communities to build or renovate their physical spaces.

Their commitment to equity brought the three to 4Culture in the first place—and it has remained the agency’s North Star in its pandemic response.

Growing up in Yakima, Carter was painfully aware of how rarely museums reflected the lives of people like him, the biracial son of an African American father and Hispanic mother. Armed with a history degree and an insatiable curiosity, he realized that he wanted to create something he’d never seen: a Black history museum.

He found the UW’s Museology Master of Arts program at the right moment.  As a student, Carter discovered that the Urban League of Metropolitan Seattle not only shared his dream but was making it come true. By the time the Northwest African American Museum (NAAM) opened its doors two years later, he was a full-time staff member.

Over the next 14 years as a museum professional, Carter was frustrated with how infrequently marginalized communities were reflected in the staff, programming and exhibits of most mainstream museums. Change was slow, in part, because organizations worried about losing donors. But Carter saw how powerful funders could be in advocating for increased diversity and equity through financial support. He was especially drawn to the community-wide reach of 4Culture.

“There’s something fascinating about a public funding agency, because public dollars should fulfill the highest public good,” Carter explains. “When you get lost, you can ask, ‘Is this in the best interests of as many people as possible?’”

At the Northwest African American Museum, Carter met an intern named Chieko Phillips who had moved across the country to attend the UW’s museology graduate program. Her love of history—and interest in how museums inspire learning—was sparked by childhood visits to places like the Museum of Civil Rights in Memphis, Tenn.

“The topics that can be explored in a museum don’t just have to be things that happened in the past,” says Phillips, who grew to realize that museums also reflect what is important to society today. And when Phillips, who identifies as Black and Japanese, looked for how people of color showed up in the narratives, she often found their stories relegated to the side.

NAAM was different from other history museums, bridging the gap between the past and the present. One of the first projects Phillips helped with looked at health disparities disproportionately affecting African Americans. It offered both historical context and preventative tips from health care professionals.

The museology program gave her an inside look at the varied “forces that work around museums and give them power.” 4Culture, she noted, was a place to help solve broad problems that many cultural institutions struggle with, such as acknowledging and addressing their own histories of racism and exclusion. Today she is the agency’s heritage lead. “4Culture has all the ingredients that feed my curiosity as to how to better serve all of the public, heritage field and cultural sectors,” she says. “It’s the curiosity that’s followed me throughout my career. Why is this happening? Can this be different? Where are people of color in this?”

Like his colleagues, Joshua Heim has had a lifelong curiosity about culture. Growing up in Hawaii, he was fascinated by hula, an Indigenous dance form whose drumbeats and chants are the soundtrack of the islands. Learning hula sparked something bigger in Heim, an Asian American; he admired hula’s role in Native Hawaiian activism for sovereignty and self-determination.

Understanding culture as a tool of community empowerment inspired Heim to earn a master’s degree in cultural studies from UW Bothell and an international development certificate through the Evans School of Public Policy & Governance. Arts and culture “are significant to our society and critical in helping us become better versions of ourselves,” says Heim. “With COVID, we’re starting to understand what it means when we can’t be together and have shared experience.”

Heim joined the 4Culture team as deputy director in late 2019. It’s his dream job, working at the crossroads of arts, culture and community. “All the good things that most people like about their communities are cultural in nature, whether it’s a festival, a local civic organization or an old building that anchors your main street,” he says. Heim leads the agency’s COVID-19 recovery task force. He says that 4Culture’s mission—to create opportunities for all people to help shape that cultural legacy for future generations—is even more critical as the agency helps organizations and artists recover from the pandemic.

Equity in a global crisis

The pandemic has transformed the way 4Culture supports the creative community, but it hasn’t altered that central commitment to equity. With programs canceled and physical spaces closed, cultural workers  have faced a significant loss of income and opportunity. Creative people in marginalized communities have been especially vulnerable. Carter looked at 4Culture’s original 2020 plan and returned to his guiding-light question: “Is this in the best interests of the public at this moment?”

Switching gears, 4Culture has issued emergency grants to artists and organizations and distributed more than $4 million in federal relief funding from the CARES Act. The agency has helped organizations install Plexiglass barriers so they can reopen under state guidelines, supported virtual programming like online art classes for refugee youth and seniors, and helped cultural workers afford necessities like groceries and child care. They built equity into that process by earmarking additional funding for communities in King County with the lowest incomes and highest need.

Now Carter, Phillips and Heim are looking past the pandemic and brainstorming ways to continue their work with a smaller budget. One of 4Culture’s revenue sources is the county’s lodging tax. Fewer visitors during the pandemic means less money for 4Culture’s grant programs.

“Many people want me to predict what the future of culture is going to look like post-COVID,” says Carter. “I am much more interested in how we use this opportunity to create a significant policy change that brings us to more racially equitable outcomes. If we have not moved the needle on where the money goes and who it goes to, then we have not succeeded.”

At top: Portraits of Brian J. Carter, left, Chieko Phillips and Joshua Heim were created by Teddy ‘Stat the Artist’ Phillips and based on photos by Sunita Martini. A Seattle-based digital illustrator, Stat the Artist is a 4Culture project participant.