The father of an incoming freshman looks to the future for advice for today. 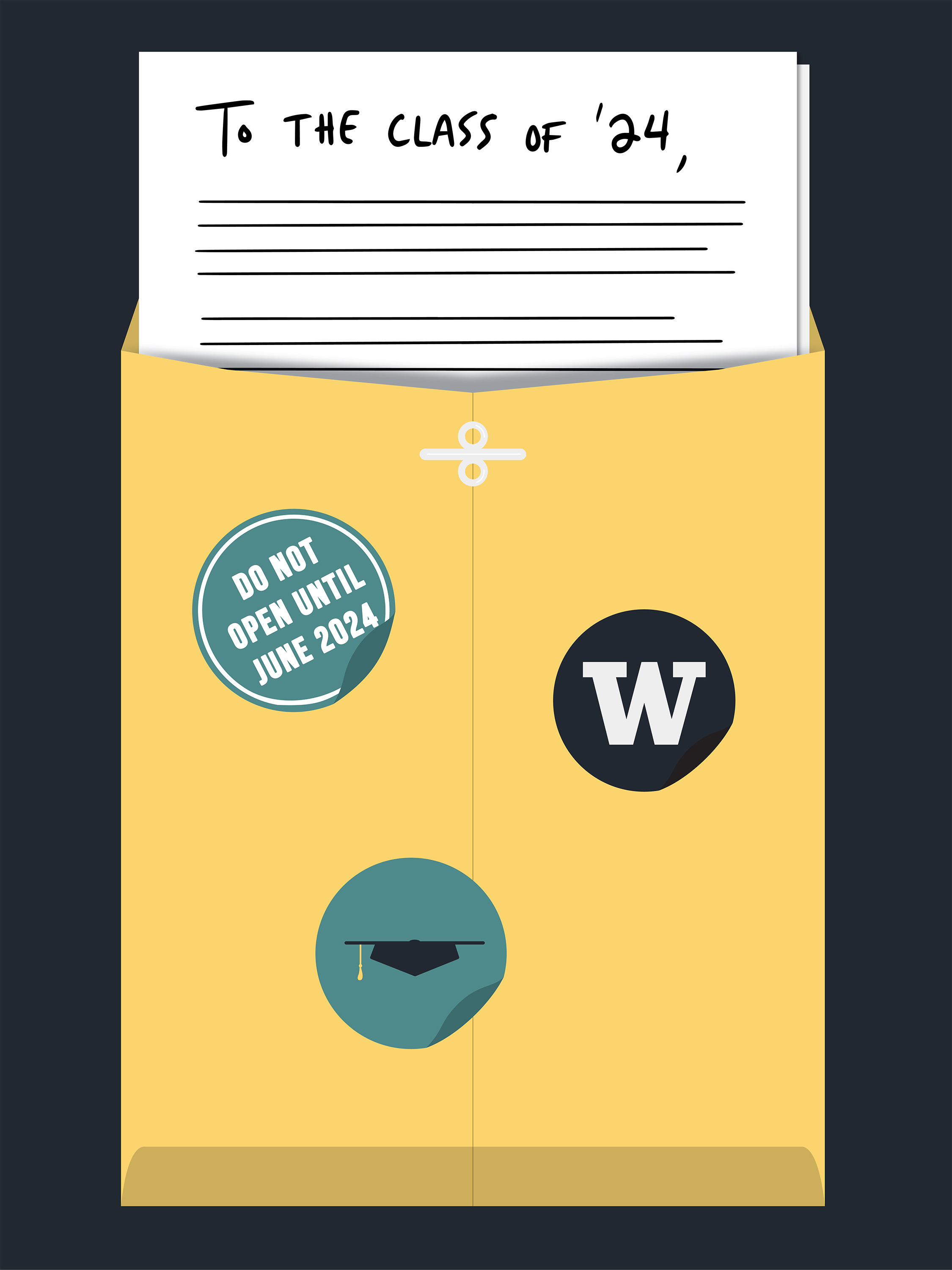 What a long, strange trip it’s been. In reality, you could say that about any group of graduating students. But for you, the University of Washington class of 2024, it seems especially applicable. I say this, somewhat authoritatively, as a highly interested third party. You see, my son is somewhere out there amongst your ranks. And while his experiences are, of course, his own, I suspect many of you have followed a similar track – taking what I can only imagine was an indirect route from “What am I supposed to do now?” to, well, I’m getting ahead of myself.

So let’s start at the (temporary) ending, shall we? As in today. Right now. As you wait, mere moments from closing one chapter in your lives and starting another, you sit shoulder-to-shoulder. Not six feet apart. Not lining the sidewalks of your neighborhoods as teachers and administrators drive by in a congratulatory parade in place of a real graduation ceremony. Or prom. Or senior skip day. Or well, just about everything you were supposed to experience in the last few weeks of high school – the much-ballyhooed “best days of your lives.”

At first, you felt cheated. And not without reason. But the truth is you had little time to grieve such shortchanging by the universe. And just as quickly as a microscopic virus laid waste to your never-made memories, you turned your eyes towards a bigger prize – and a bigger challenge. Namely, your impending matriculation right here at the University of Washington in September 2020. At least, you hoped it would be in September. And in 2020. And here.

But it did happen. Just how it had every early autumn since 1861. Except, not at all like it ever had in the past 160 years. Do you remember your first day here? Perhaps you stared out the window of your dorm room soaking in the view of a campus you had visited only once – maybe – but was now your home. You were saddened, if not particularly surprised, to see a dim reflection of what you had always imagined this moment would be. The quad wasn’t teeming with upperclassmen reuniting with old friends. Frisbees and hacky sacks (they still have those, right?) were replaced with hand sanitizer stations every dozen yards. Even the squirrels seemed to be keeping six degrees of separation from each other.

Still, what were you going to do? Go home? After being sequestered since March, starting college – even in the strange days of COVID – may have felt like, well, not so much as a vacation than at least a reprieve. So you dove in mask first. Spent your early days remote-ish learning, sometimes sitting and streaming outside the lecture hall in which you were supposed to have been taking notes. Ironically, you found it easier to make friends while sporting your best N95 gear. Maybe it was the instant esprit de corps engendered by the pandemic. Or perhaps you were just a little more willing to open up to someone who had at least one thing in common with you. Or maybe everyone just looked a little nicer in real life than on a Zoom call. And so you found yourself with a couple dozen new besties, and nearly 7,000 backup BFFs at the ready.

Now hit fast-forward. An effective vaccine was finally developed – a little later than everyone had hoped but still sooner than could have been expected. And it was no coincidence that the line for shots outside Hall Health Center doubled as the ticket queue for the Huskies’ first home football game to be played the old-fashioned way. With fans. All of them. But as life outside the confines of campus began more and more to resemble the same old grind of pre-pandemic days, yours did not. Not individually. Not collectively. You’d been transformed from people who once wished to be treated like adults into bona fide leaders-in-waiting. And for some of you, well, you’re not even waiting for any of us Gen-Xers (let alone Boomers) to get out of the way. Nor should you.

Here’s what it comes down to: Almost every generation has a unique moment that shapes them. For too many, it’s been war. For others, social upheaval. For more than a few, economic collapse. A pandemic? Well, that was a new one for modern times. But you did what – and I’m sorry to have to throw a bit of shade at your uniqueness – those previous generations did. You got one with it. You ticked the box on every success-focused cliché in the book. You rose to the occasion. You flipped the script. You turned challenge into opportunity. And you grew up. Without yet growing cynical (and please stay that way).

You’re about to step out into what just about everyone will refer to as “the real world.” Don’t believe them. You’ve been living in the real world for quite some time. And doing a damn fine job of it. So take the lessons you’ve learned being the first four-year class of COVID-19 graduates – the focus on justice, the upgraded empathy and emotional intelligence, the desire to serve others with every action – and go. And then do. And then go a little further. And do some more.

Repeat this as often as possible and you’ll be amazed at what the world has become when it’s your time to give a speech like this. Because, whether arrived at by choice or molded by challenge, you long ago stopped asking what you were supposed to do and realized there truly isn’t a single thing that you can’t.

Eric Gordon is the father of an incoming freshman.