A cure for color-blindness could be just a gene away

On their first date, in 1980, Jay and Maureen Neitz attended a lecture by renowned primatologist Jane Goodall, and had an argument about the color of Jay’s car (he said fire-engine red; she said orange). That night foreshadowed the major pieces of their professional lives—monkeys and color—so that what happened nearly three decades later seems almost foreordained. Last fall, the Neitzes, who joined the UW School of Medicine faculty in 2008, reported in the journal Nature that they had cured color-blindness in two squirrel monkeys using gene therapy.

The monkeys, Dalton and Sam, had been color-blind since birth. They saw the world in blue, yellow, black, gray and white, much like people with red-green color-blindness—which is the most common genetic disorder in humans, affecting 1 in 12 men and 1 in 230 women. 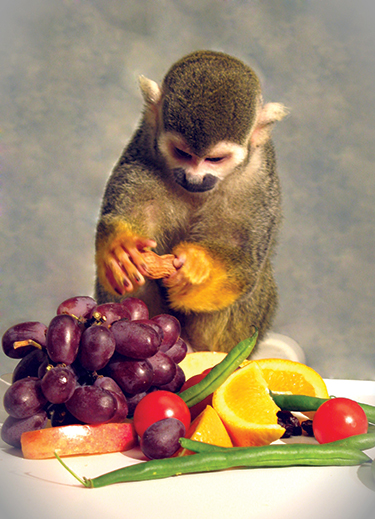 “One of the things we’ve been really interested in for a long time is trying to understand the circuitry for vision and how color vision evolved,” says Maureen, who is the Ray H. Hill Endowed Professor of Ophthalmology. The Neitzes, who married in 1981, have been a scientific team since 1986. They even look quite a bit alike: Both are slim, with short, wavy gray hair and old-fashioned wire-rimmed glasses. But they’re not identical. Jay, for example, has a kind of Socratic manner, and is happy to drift into philosophical eddies of conversation; Maureen is less voluble, but her statements tend to be more definitive and emphatic.

The similar-but-not-identical pattern extends to the lab. While the two have some different areas of expertise—Jay has a background in physics, Maureen in molecular biology—overall “we try to obscure any differences,” says Jay, who is the E. K. Bishop Endowed Professor of Ophthalmology. “We’re not independent. We’re a unit.”

The gene therapy project began in 1999, when the Neitzes were at the Medical College of Wisconsin, and involved collaborators from there, the University of Florida and the UW. First, a gene encoding human L opsin, the red-sensitive photopigment, was inserted into a virus that had been genetically engineered not to cause disease. Then, a surgeon injected trillions of copies of the virus into the slim space behind the retina at the back of the monkeys’ eyes. The retina’s pigment-producing cells, called cone cells, took up the virus and incorporated the new DNA. After five months, the monkeys’ cone cells had begun to produce the red-sensitive pigment, and Dalton and Sam were seeing in Technicolor.

Of course, a monkey can’t tell you that the grass is green and a rose is red. So to evaluate the monkeys’ color vision, the Neitzes developed a computerized, touch-screen version of the test used to screen for color-blindness in humans, with shapes made of colored dots in a field of gray ones.

The Neitzes trained the monkeys to touch the part of the screen where a colored blob appears. If they get it right, they get a sip of grape juice. Before the gene therapy, Dalton and Sam couldn’t pick green or red shapes out from the gray background. Now, they get the grape juice almost every time.

Perhaps the most astonishing piece of the story was not that the monkeys’ eyes could incorporate new DNA, but that their brains could recognize new colors. Previous research had suggested that adult brains often cannot make sense of new visual stimuli, so you couldn’t necessarily fix vision by fixing the eye. The Neitzes’ study is part of a growing body of evidence suggesting that even adult brains can be surprisingly flexible, and capable of more rewiring than we might think.

Among many other projects, the Neitzes are now working to develop gene therapy for human color-blindness. And Dalton and Sam? Three years after the treatment, the two monkeys are healthy and still have full color vision. In fact, Dalton’s favorite color is green, Jay reports—give him a choice between two similar objects and he’ll pick the green one every time.