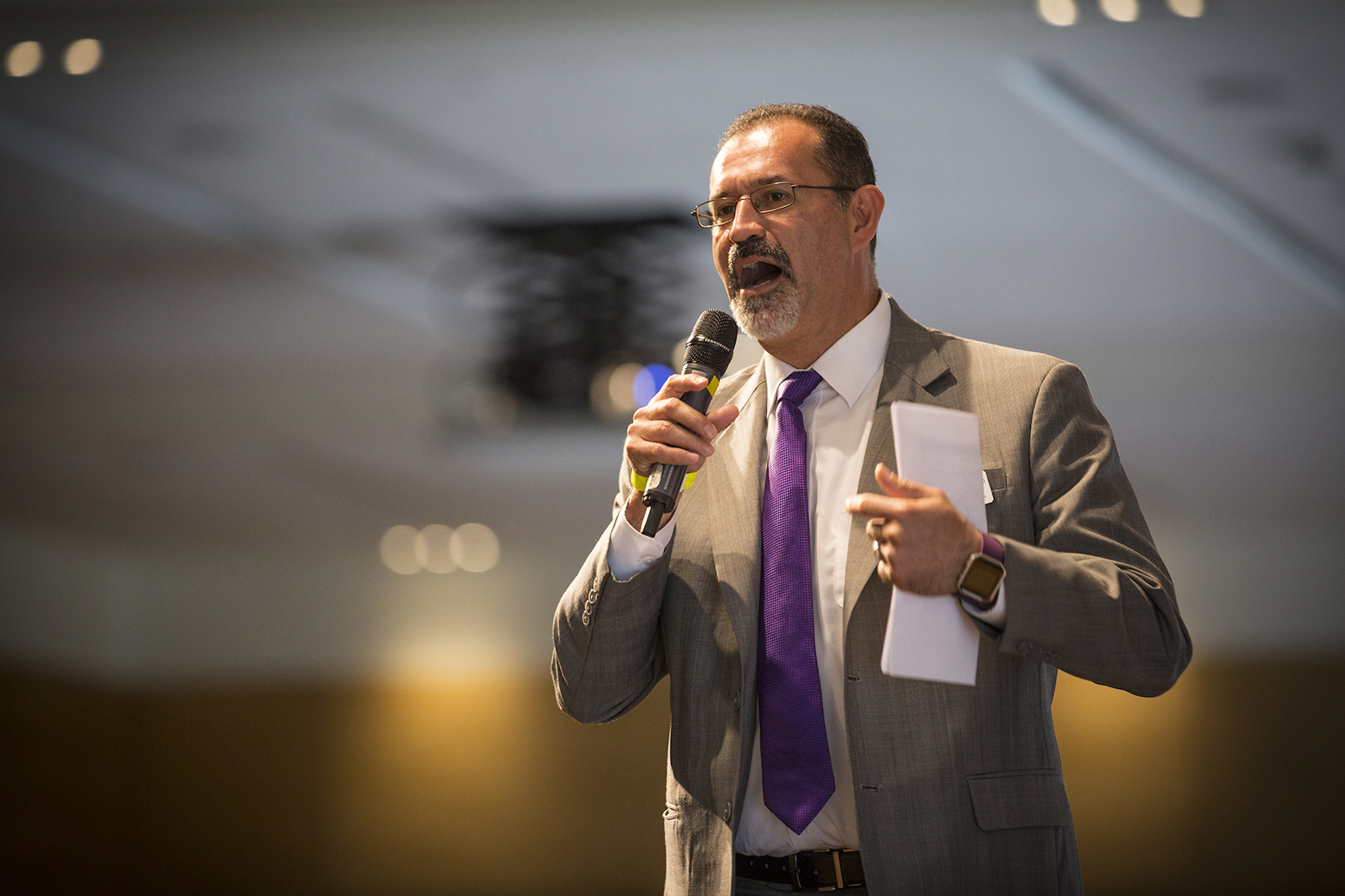 ‘A Husky to his absolute core’: The legacy of Dr. Gabriel Gallardo

By broadening the grants received by the Office of Minority Affairs & Diversity, “Dr. Gabe” dramatically expanded opportunities for underrepresented students at the UW.

It was hard to find a bigger Husky than Gabriel Gallardo. He sported three UW degrees and served underprivileged students for 27 years in the Office of Minority Affairs & Diversity. Along the way, he married a fellow alum and raised a family in student housing.

“For my dad, being a Husky was not just about being a student or an educator, it was an entire family experience,” says daughter Stephanie Gallardo, a high school teacher in Tukwila. “He was a Husky to his absolute core.”

Her father, the irreplaceable Dr. Gabe, ’89, ’93, ’00, died in May of colon cancer. Gallardo worked for OMAD since 1993, most recently as the Associate Vice President for Student Success, but he held numerous administrative and leadership positions over the years, including Acting Vice President after Sheila Edwards Lange was named interim president of Seattle Central College.

“You can’t tell the story of OMAD without Dr. Gabe,” says Kristian Wiles, a close friend who has moved into Gallardo’s role on an interim basis. The two worked together for 10 years and spoke every day. Wiles credits Gallardo for broadening OMAD’s footprint of receiving grants, from the U.S. Department of Education to the National Science Foundation to the National Institutes of Health. “We’re an organization with an annual budget of $18 million, and just about half of that is from outside sources,” Wiles explains. “We’ve been able to expand college opportunities and success for underrepresented students as a result.”

But Gallardo’s professional accomplishments only tell part of the story. He was a gentle, lighthearted leader who dealt with challenges in a human, thoughtful way. With family, he was the jokester, the party guy. The one who took off his shirt and danced with the 75-year-old aunts. He was so many things to so many people that when Wiles posted the news of his passing on social media, he heard from hundreds of people, some of whom were essentially strangers. “A common response was, ‘I only spent a few moments with him, or I only saw him at conferences, but he had such an impact on me,’” Wiles recounts. Even staffers at congressional offices understood the loss.

Teri Ward, director of the Health Sciences Center Minority Students Program, knew Gallardo for 26 years and reported to him in her current role. “When you’ve known and worked with someone that long, you really learn how genuine their support is,” says Ward, ’90, ’99. When she went on maternity leave as an admissions specialist in 1993, Gallardo stepped in as her replacement. When he moved on to be director of the Early Identification Program, which helps students apply to graduate school, the first personal statement he read was Ward’s. (She went on to earn her Master’s in Education from UW Bothell.) “He provided support when I went on maternity leave,” Ward says, “and he supported me when I went to graduate school.”

Emile Pitre, the longtime associate vice president of assessment in OMAD, ran the Instructional Center when Gallardo was an undergrad. Gallardo wanted to be an engineer, but Pitre says he was dissuaded by the challenges of the math prerequisites, so he switched to geography, earning a bachelor’s in 1990, and then a master’s and Ph.D. in the subject.

Still, Pitre says Gallardo was a data-driven decision-maker in the decades they spent working together, unafraid to delve into statistical analysis. As for why Gallardo stuck around for so long? Pitre can relate, since he did the same thing, save for a couple years in North Carolina. “There’s something about working in minority affairs,” says Pitre, ’69. “At the Instructional Center, I call it God’s work. Once you help others be successful, it means so much that you stay.” (Pitre interviewed Gallardo for an upcoming book about the history of OMAD, “From Revolution to Evolution: The Story of the Office of Minority Affairs & Diversity.”)

A refugee from Chile, Gallardo’s personal history informed the work he spent his life doing. That’s why he authored the grant that brought the College Assistance Migrant Program to campus, among many others. “As a student, he didn’t have all the resources that OMAD now has for students,” daughter Stephanie says. “Being part of that process, it filled his heart.” 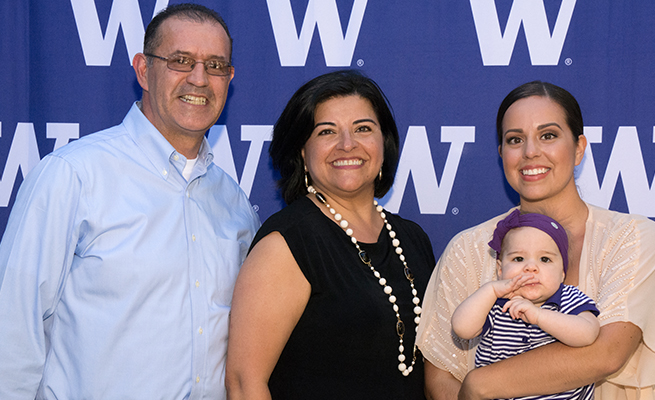 Gallardo avoided returning to Chile for decades. The trauma was still too close. But in 2012, Stephanie trekked through Central and South America and found her way to family in her dad’s hometown of Purranque, Chile. “I called him and I pled with him: ‘Dad, you have to come back. They talk about you like you’re a famous celebrity. They love you so much.’”

Gallardo finally made the trip in 2012, arriving to a series of house parties and a local radio announcement: “Gabriel Gallardo, son of Atilio Gallardo, is back after 36 years.” Aunts and uncles took him back to the house where Chilean police had threatened to kill his family when he was 12, before taking his father as a political prisoner for two years. Gallardo burst into tears as the memories flooded back. This time, Stephanie was with him.

After being diagnosed with colon cancer in December 2015, Gallardo was given three to six months to live. He went back to Chile once more to say goodbye, flying home to start chemo on New Year’s Day. A few months later, his father, who also lived in Washington, fell into a coma and died. The folklore in the Gallardo family is that his father made a deal with someone upstairs so that his son could keep living: And so Gallardo beat the odds, which were under 4%.

Wiles tries to remind himself of that. “He could have missed all that he got to experience in the past five years,” he says. “He got to spend time with his granddaughter, continue to do work that he cared about, and to see the OMAD 50th anniversary. I try to stay focused on that as a gift for him, versus the loss being the only focus.”

As the second round of cancer progressed, Stephanie went on medical leave to move in with her father in February. She cherished their morning routine: Dad made coffee and they watched “The Price is Right.” Gallardo was adamant about getting a puppy to help him through cancer this time, so Lola moved in. Stephanie also started bringing over another guest, her new boyfriend Jorge. In early May, Gallardo called his daughter in to his room. By that point he was bedridden and only lucid for about half of the day, but he asked about her boyfriend. Jorge came in, and Gallardo looked him straight in the eyes. Stephanie’s mom joined them.

“We explained to my dad that we really love each other and that, even though this is a terrible time, we have the intention to be together,” Stephanie says. “The conversation turned into Jorge asking for permission to marry me. I never imagined I would be able to have that moment. One of my greatest fears was that my dad was never going to be able to meet the person I married.”

Gallardo died on May 11. A month later, Stephanie and Jorge had a wedding in the backyard—so Dad could be there. Stephanie’s cousin gave her a locket with her favorite photo of her and Gallardo. “I wrapped it around my bouquet, and I walked down the aisle with my dad.”

I met Dr. G in 2017 for the Tahiti Summer Study Abroad trip hosted by OMAD, the iSchool and Christopher Rothschild. Little did I know he would have such a positive impact on my life as an educator and mentor. Most professors we meet are only in our lives for a short amount of time, but Dr. G was committed to supporting his students even after his time with them in the classroom.

He made close connections with the community in Tahiti and with our host family. It truly showed how greatly respected he was. He was given the name Taote, meaning “professor” or “teacher” in Tahitian. He sang “Iaorana” in Tahitian and danced to Elvis Crespo’s “Suavemente.” He encouraged us to absorb the Ma’ohi culture. 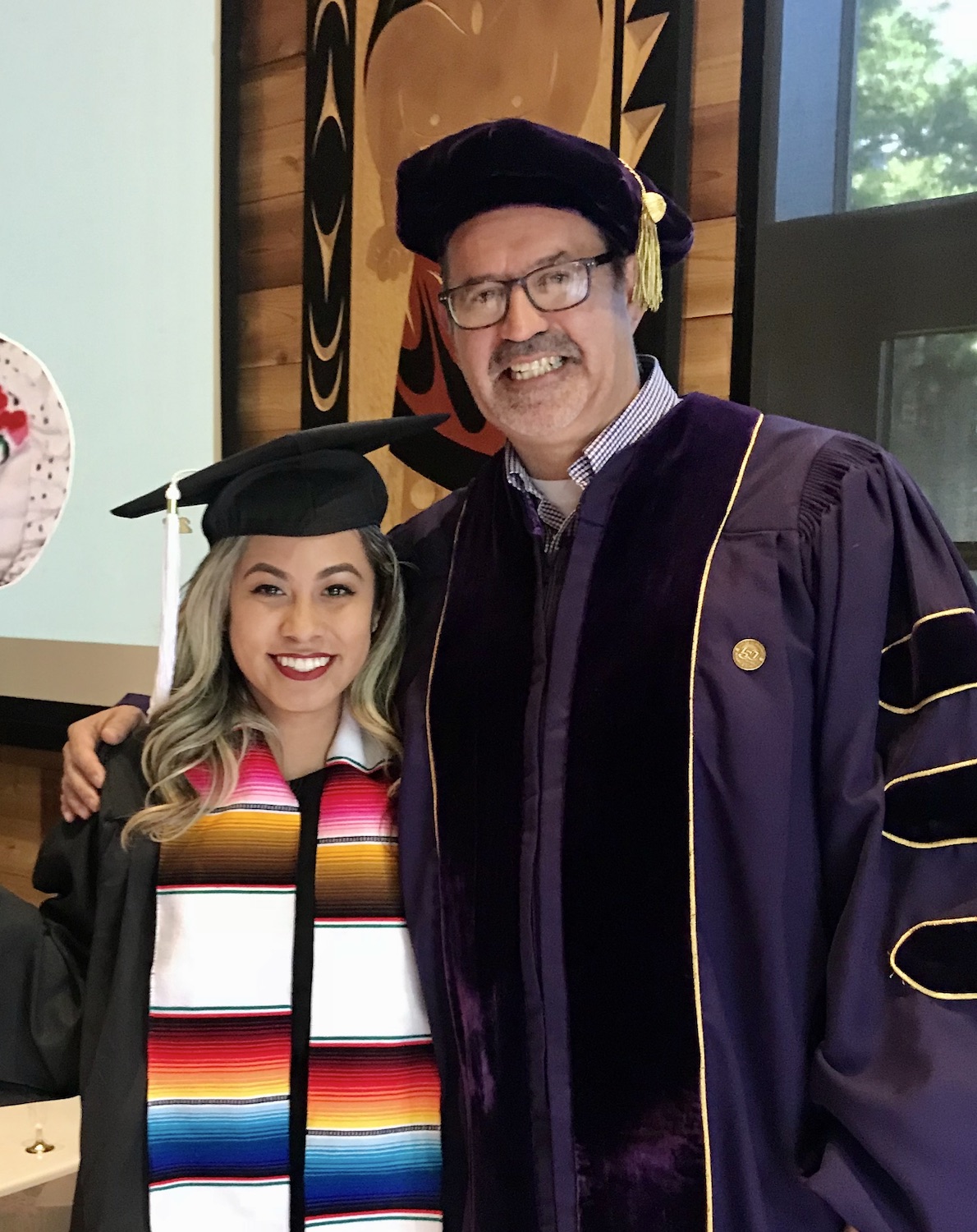 After Tahiti, he continued to mentor and build on the relationships with students. He showed up for us when we invited him to events in South Seattle to increase access to higher education and when we had presentations out in the community. He understood how important our interests were and made time to attend.

As I reminisce on my memories with Dr. G, the most memorable was receiving my sarape stole, the sash I am wearing in the picture, that remains hanging on my bedroom wall. As I walked across the stage inside the wǝɫǝbʔaltxʷ Intellectual House for La Raza Graduation in 2018, I was greeted by his signature smile as he welcomed me with open arms. “Felicidades,” Dr. G exclaimed as he hugged me, and laid the beautifully woven stole on my shoulders: “You did it!”

As scary as the unknown future was going to be, it was reassuring to know I had someone like Dr. G in my corner to support me through the transition out of college and into a new stage in life. The connection I had with him is incomparable to any other professor or mentor I’ve ever had. He is deeply missed, but will forever be loved by his family, friends, and UW community.

Quinn Russell Brown is the digital editor of University of Washington Magazine.