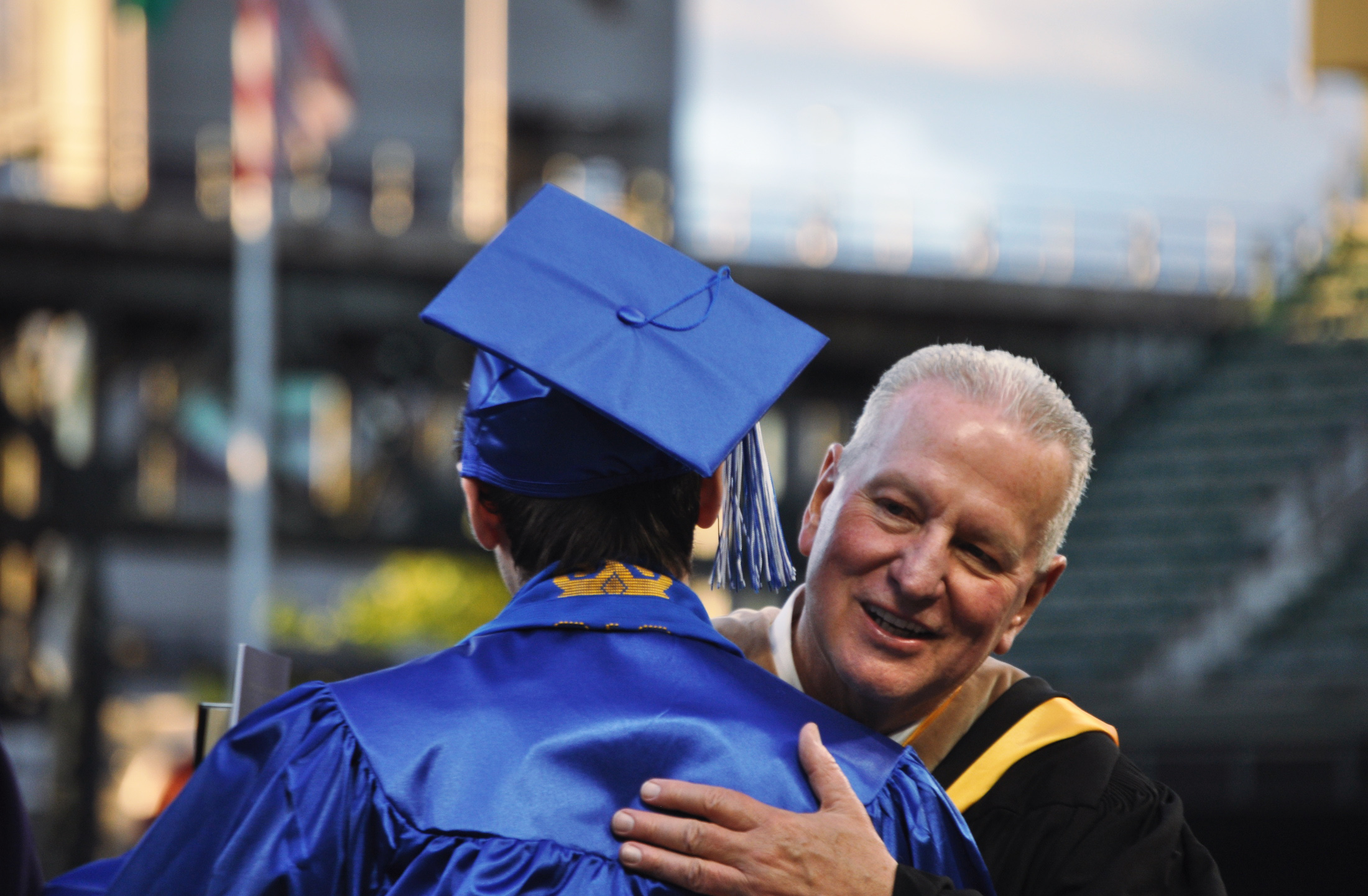 A lifetime of leadership

For his legacy of serving Washington’s community college system for more than four decades as well as his leadership at the University of Washington Alumni Association, Gary Oertli receives the UW Alumni Association’s 2020 Distinguished Service Award.

Gary Oertli, ’70, ’72, ’85, a longtime leader of Washington community colleges and a former president of the UW Alumni Association, is this year’s recipient of the UWAA Distinguished Service Award. The award has been given to outstanding individuals and groups since 1970.

Oertli most recently spent 10 years as president of South Seattle College and is now the college’s president emeritus. During that time, he played a key role in dramatically expanding the 13th Year Promise Scholarship, which provided one year of tuition-free college and support services to Seattle public school students. The program was so successful that it became part of Seattle Mayor Jenny Durkan’s platform and now is available to graduates of all of Seattle’s public high schools, providing a new path to success.

Growing up in a low-income family, he was the first in his family to go to college. Oertli credits his UW education as the launching pad for a 45-year career in higher education. He believes his education made it possible for him to pass that success on. “The thing that I’m most proud of is that because I graduated from college, my children have also graduated from college,” he says.

Oertli points to statistics that show parents who graduate from college are much more likely to have kids that attend—and graduate from—college. He has dedicated his career to expanding access to college, especially in low-income and first-generation, diverse communities, because he sees this as a vital aspect of economic development. “If we don’t pay for it up front and help them get the great jobs in our community, we’re going to pay for it in a different way,” he warns.

The 13th Year Program was created by the South Seattle College Foundation. The college became concerned that the first class from Cleveland High School was not prepared for college-level success. Oertli credits the late Elizabeth Pluhta, ’09, the college’s vice president of administration and head of the nonprofit South Seattle College Foundation, for developing the Readiness Academy concept to make sure students were ready for college-level work. She was also the lead for the $11 million endowment campaign.

In the early days of the 13th Year Program, these services took the form of a Readiness Academy, which included a two-weekend assessment course that prepared students for college-level math and English. A boot camp followed, which motivated students and taught them how to navigate the resources they would need in college.

“We talked to students about grit,” Oertli explains. “We told them, ‘You can do this.’ At the end of the boot camp, we held an event to celebrate the students, and they dressed up and made business cards to learn how to network. Staff and community leaders came to the event. It was a wonderful celebration.”

“Gary is from the community, he saw the transformational impact of higher education. He built his career and legacy in the community colleges, he’s been deeply committed to this public university, and he’s tireless in his dedication to contribute and give back.”

Oertli was born in the High Point housing projects of West Seattle. His parents moved the family often and didn’t own a home until his junior year. He graduated from high school at Chief Sealth, something neither of his parents had done, but he was by no means a star student. He enrolled in the University of Washington, where he studied business and relied on his fraternity for structure and motivation. Oertli and his fellow classmates played hard and studied hard. Students with high GPAs were occasionally surprised with steak dinners, while those who underperformed got a plate of beans.

He paid for his tuition by working as a student teacher at Renton High School. “I went to Renton High from 7 to 11 in the morning, and then took my classes at UW in the afternoon,” he recalls. “I’d be so tired I’d be nodding off. But it set the basis for me being a good faculty member when I moved on to the community college level.”

Having a steady paycheck as a college kid yielded a great perk: “I got a bean bag chair. I was living high.”

In his senior year of college, Oertli became temporarily certificated by the state to teach with minimal supervision. The more he grew as a teacher, the more he understood that being a successful teacher meant acting as a mentor to his students as well. “A lot of it was self-confidence and reassurance, saying, ‘You can be successful.’ I told my students that they could go to the University of Washington and graduate.”

He was speaking from experience. He soon graduated from UW, and two years later he added a Master’s in Business Education. He started teaching at Edmonds Community College and stayed there for 20 years, culminating in becoming executive vice president. He went on to hold executive leadership positions at Seattle Central College, Shoreline Community College and most recently South Seattle College, from which he retired as president in 2017. “My time at the UW prepared me for a very meaningful career,” he says. 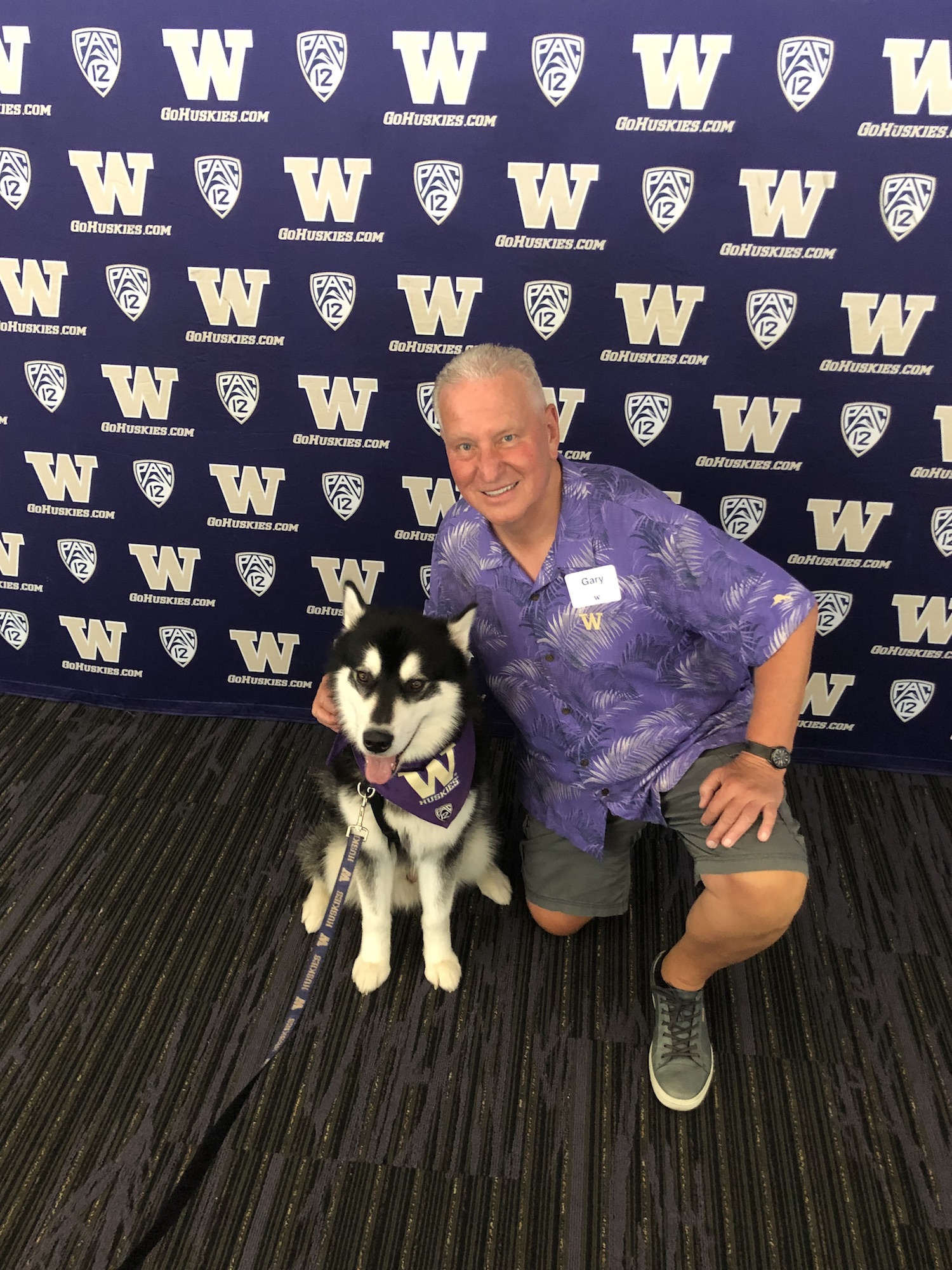 Service to the community has always been important to Oertli. A lifelong Husky football fan, he served as president of the University of Washington Husky Band Foundation. “I’ve never played an instrument in my life,” he says. Yet he knew what a vital role the Husky Marching Band played in the lives of the students and fans of the Huskies. In the late 1990s, he served on the UWAA Board of Trustees for seven years, becoming president in 2000.

“Gary made everyone feel like they were part of the momentum, even those in the most junior roles,” says Paul Rucker, ’95, ’02, executive director of the UW Alumni Association and the University’s Vice President of Alumni and Stakeholder Engagement. “He was attentive to the partnerships of the University. As a higher-ed president, he was very interested in institutional relevance.”

At the time, the UWAA had a legacy of being oriented toward athletics and social events. Under Oertli’s leadership, the organization repositioned itself to better align with University priorities. It also expanded services and programs to alumni association members and worked to secure outside funding to become less reliant on the University.

“Today, we should be so grateful that we have the University of Washington, a university that is helping solve our current health crisis. People here are doing work to make the community and world a better a place.”

Another example of Oertli’s service to higher education came in 2016, when President Ana Mari Cauce tapped him and Rucker to chair the Community College Engagement Initiative (CCEI), along with Michaelann Jundt, associate dean for UW Undergraduate Academic Affairs. The goal was to redesign and rebuild the UW’s relationships with the state’s 34 community and technical colleges, smoothing the path to admission for local students.

“The University is a global one, but it also works locally,” Oertli says. “President Cauce was very passionate about engagement with community colleges in our state, because the University realized that’s where they were getting a large percentage of their low-income, diverse, first-generation students.”

Rucker credits Oertli “for connecting the dots: the new presidency of President Cauce, the state of higher ed in Washington at the time, and how the University and our students would benefit from a new relationship.”

Rucker also notes that Oertli was an early leader in what is now a nationwide initiative in Guided Pathways, a new way of organizing the curricular approach for college students to access career pathways.

“Gary saw the transformational impact of higher education,” Rucker explains. “He built his career and legacy in the community colleges, he’s been deeply committed to our public university, and he’s been tireless in his dedication to contribute and give back.”

Besides emerging from economic hardship, Oertli has been a mentor to students in other areas. One of the biggest challenges of his personal and professional life was coming out as gay in the 1990s. He had been married with two daughters, and without notice, his life simply began to change. “It was sort of like figuring out who I was,” he says. “It was different back then. Not that it’s easy for people now, but it was very challenging for me to be public about that.”

He was careful to not be outed when his kids were still in high school. “They had enough going on,” he says. Today, one of his daughters helps Fortune 500 companies with diversity, inclusion and equity, and the other for a successful startup in Seattle. Oertli has been with his partner, Jeff, for 24 years.

In retirement, he has done some coaching and consulting for community colleges around the state. But mostly the father of two daughters has been spending time in the garden, with his family and singing to his young grandsons.

“I’m teaching them ‘Bow Down to Washington,’” he says. “It’s what I used to sing to rock my daughters to sleep.”

Quinn Russell Brown is the digital editor for UW Magazine.