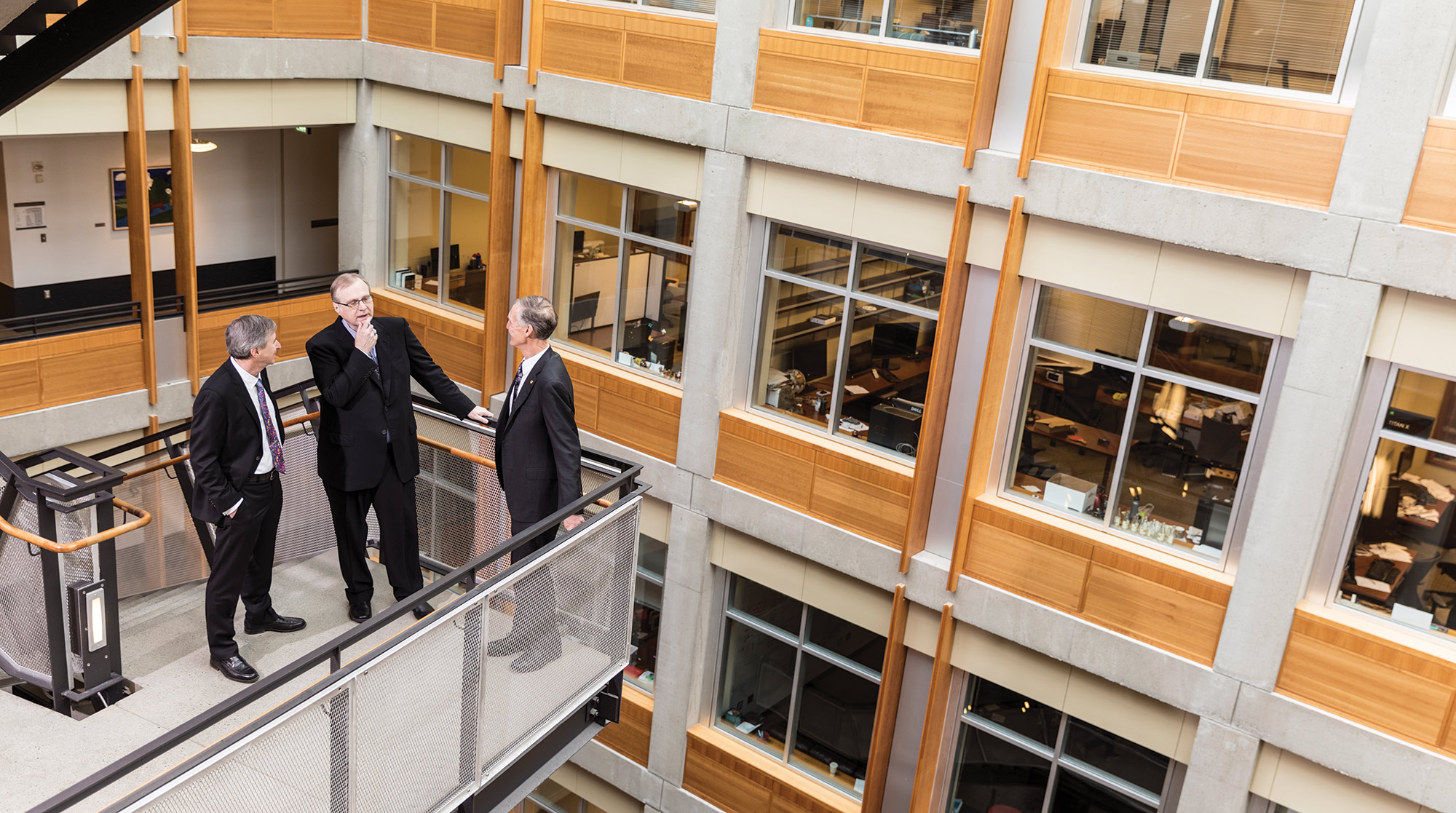 Across the UW, Paul Allen’s legacy is unmistakable

To the late Paul G. Allen, the University of Washington felt like home. He and his younger sister, Jody, grew up in the Wedgwood neighborhood not far from campus and happily spent many hours of their young lives at the UW.

Sometimes, they and their mom would sit in the family car reading while waiting for their dad to finish his day’s work as associate director of UW Libraries. Allen also loved to frequent the campus’ libraries to read books about space and science, and he eagerly and often attended Husky football games with his father. His exploits as a teenager are perhaps best known, when he and fellow Lakeside School classmate Bill Gates came regularly to the UW campus to use computers. That special bond Allen had with the UW would last the rest of his life, and his impact will be felt on campus­—as well as on society—forever.

Allen, who died Oct. 15 at the age of 65, lived a life that embodied the spirit of the UW through his relentless quest for learning and drive to innovate. He saw possibility everywhere, which is why he and the UW were so intertwined and why he became one of the University’s most ardent supporters with generous gifts and big ideas that have touched the lives of just about all of us. And why he transformed the world in so many ways.

Cancer robbed us of this incredible individual, an innovator with insatiable curiosity, a big thinker who possessed equally powerful drives to help humankind and build community. In her eulogy, UW President Ana Mari Cauce said: “Paul defined himself as a seeker of the next Big Idea, and one can only wonder what big ideas he would have brought to fruition if given more time. He understood the power of the arts and sports to heal, renew and build community and it’s hard to imagine our world or our city without him—he was truly Seattle’s 12th man. But I’m grateful for what he created during his 65 years and for the legacy that those of us inspired by his drive and generosity will continue to build upon.”

His legacy started innocently enough, when Allen and Gates were high school students who came to campus to use the UW computer lab. They spent so much time in the computer lab that in 1971, Allen received a letter from Hellmut Golde, then-director of the computer science laboratory, telling him, “In view of … a number of complaints from the regular users of the Laboratory, I must ask you to turn in your keys and terminate your activities in the laboratory immediately.” He and Gates had overstayed their welcome. But being asked to leave the computer lab did nothing to tamp down their innovative spirit.

“The University of Washington was near and dear to his heart—that’s why he got his start with computers.”

Oren Etzioni, CEO of the Allen Institute for Artificial Intelligence

For instance, in 1972, Allen and Gates met up with UW electrical engineering student Paul Gilbert and had him build a computer system around an 8-bit microprocessor for a project that would track traffic called Traf-o-Data. While this venture did not succeed, Allen would later recall, “If it hadn’t been for our Traf-o-Data venture, and if it hadn’t been for all that time spent on UW computers, you could argue that Microsoft might not have happened.”

“The University of Washington was near and dear to his heart—that’s why he got his start with computers,” recalls Oren Etzioni, a former UW computer science professor who is now CEO of the Allen Institute for Artificial Intelligence. “Microsoft would not be there or what it is today had it not been for that connection. Computers were very precious back then and as a high school kid, getting access to them was huge.”

Allen’s connection to the UW didn’t end with the computer lab. After co-founding Microsoft with Gates, he provided funding for the Allen Library addition (in honor of his father). He also funded the Allen Center for the Visual Arts, and he started the Kenneth and Faye Allen Library endowment. (His mother, Faye, ’50, a schoolteacher, died in 2012.) 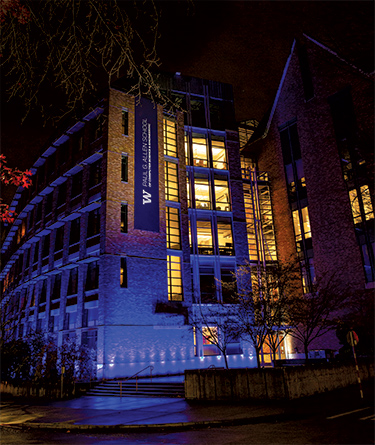 The UW joined the city of Seattle in paying tribute to the late Paul Allen Nov. 3-4 by illuminating buildings with blue lights as “beacons of remembrance.” Photo by Dennis Wise.

In 2002, he donated $14 million to help build the Paul G. Allen Center for Computer Science & Engineering that tripled the department’s lab space. Last year, he donated $40 million as the department became the Paul G. Allen School of Computer Science & Engineering. That gift—culminating Allen’s long-standing support of the UW’s growth and excellence in the field—ensures the UW’s place as one of the nation’s leading institutions for computers and technology. A plaque in the building features a quote from Allen that sums up his vision perfectly: “We are entering a new golden age of innovation in computer science and UW students and faculty will be at its leading edge.”

“It raised our national visibility. It associated us, in perpetuity, with a beloved visionary,” says Ed Lazowska, Bill & Melinda Gates Chair in Computer Sciences at the Paul G. Allen School of Computer Science & Engineering. “And it set a high bar for us—to pursue Paul’s vision of science and technology advancing in pursuit of societal grand challenges.”

Allen’s foresight and generosity went a long way to make the UW a pathway for incredible impact in a variety of fields.

For example, he created a number of institutes—such as the Allen Institute for Artificial Intelligence and the Allen Institute for Brain Science—that have strong links to the UW. Lazowska points out that many Allen School students and faculty split their time between the University and the artificial intelligence institute, which “increases the capabilities and impact of each.”

Allen was interested in nearly everything—computer technology, biology, brain science, space, rockets, endangered elephants, orcas, and other species, movies and sports; don’t forget that it was he who saved the Seahawks from moving to California in the 1990s by buying the team and getting a new stadium built in Seattle. Allen also was renowned for his love of music. Gilbert, ’73, said that when he would go to Allen’s home to work on the Traf-o-Data computer in the early ’70s, Paul would play the guitar all the time. “He never wanted to concentrate on one thing,” Gilbert says.

“Paul was always looking to the future—that was one of the things that made working with him so interesting and why his impact on so many things was so innovative.”

Befitting his interest in culture, Allen opened a number of museums, including the MoPOP (formerly the Experience Music Project) at Seattle Center, as well as the Living Computer Museum in SoDo, which features computers from various decades. “To be able to bring our students down to the Living Computer Museum and show them where all the stuff they use today came from is just mind-boggling for them,” Lazowska says.

Remembrances came in from all over the world for the man who touched so many. One in particular came from David Horsey, ’76, who worked at The Daily and became a two-time Pulitzer Prize editorial cartoonist. He drew a tribute that included Allen’s young, bearded face with the lines: “A prodigious mind, A generous heart, A questing soul.”

While the shock of Allen’s passing is still with us, the gratitude for his friendship and support will always be strong. “Paul has always been incredibly decent to this institution. And I think this institution recognizes that,” says Daniel, who along with Lazowska, nominated Allen for an honorary UW degree. (The UW Board of Regent of Regents approved the honorary degree for Allen but it was not formally awarded to him before he died.) “And part of the reason Ed and I nominated him for the honorary degree was less about all his giving and much more about his intellectual impact. And what he had done to transform the world.”

In his book “Idea Man,” published in 2011, Allen explained himself. “Some people are motivated by a need for recognition, some by money, and some by a broad social goal. I start from a different place, from the love of ideas and the urge to put them into motion and see where they might lead.”

Allen might not be with us anymore, but his impact on the world and the UW is far from finished. “Paul was always looking to the future—that was one of the things that made working with him so interesting and why his impact on so many things was so innovative,” Cauce says. “We will continue his quest.”

Jim Caple is a frequent contributor to Columns. He used to write for the Seattle Post-Intelligencer, St. Paul Pioneer-Press and ESPN.